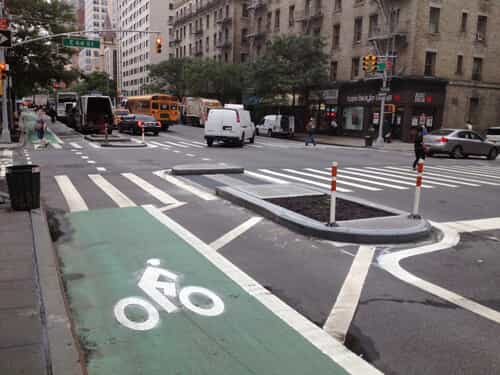 In September, we reported about dangers cyclists pose to pedestrians. And on October 23, Mayor Bill de Blasio and the Department of Transportation (DOT) announced a new plan to enhance the safety of the City’s bike lanes.  But, again, the focus is on cyclists and increasing the number of bike lanes, rather than addressing the dangers that this additional transporation mode is presenting to the public.

Other precautions include lowering the speed limit along certain roads, including Linden Boulevard, which has had 14 fatalities since 2013.

“While we celebrate today’s historic milestone, we are mindful of the remaining challenges we face to ensure anyone who rides a bicycle in New York City feels safe and won’t have their ride end in tragedy,” said Deputy Mayor Laura Anglin.

"It's interesting that the Mayor's Office is conspiciously silent on the increasing number of pedestrian accidents and deaths that these bike lanes and reckless cyclists are triggering," said Jonathan H. Newman, Senior Partner at Newman Ferrara LLP.   "It will likely take a bunch of personal injury lawsuits, before officials finally realize that this expansion plan may be ill-conceived, and not aligned with the interests of 'all' New Yorkers."