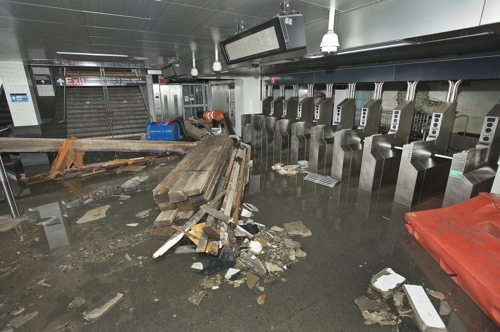 Since it was a sunny autumn day, Brooklyn residents were puzzled to find an entrance to the G train’s Broadway station completely underwater.  One person resorted to social media to find out what was going on.

Kaye Blevgard posted a Tweet asking the MTA to “explain yourself.” And a member of the MTA’s social media team jokingly responded that the agency was “pivoting to submarines.”  But thereafter noted that the water was intentionally placed there for “testing” purposes. The response read:

“But actually, we were testing a new ‘flex gate,’ which is a flood barrier that would allow us to seal off a subway entrance. We ‘test flood’ the entrance for four hours to make sure it was installed correctly, which it was!”

The agency then proceeded to explain that they are prepping for the effects of “climate change.”

“The location of the yard provides ideal access to multiple subway lines, but it's vulnerable to flooding,” the MTA press release reads. “With intense weather events like Superstorm Sandy expected to occur more often, we need to act now to protect this vital part of our system, so we can keep trains running safely.”

Superstorm Sandy destroyed the South Ferry station, which was flooded by nearly 15 million gallons of saltwater, according to Gothamist. That led to some $369 million worth of repairs. The MTA believes the “Flex Gate” will prevent that kind of damage from reoccurring in the future.

But the public backlash was almost immediate, with one Gothamist commentator noting, “This may or may not work. Water always finds its level, and the subway system is particularly porous in ways the MTA may not be considering. What these gates will do, however, is to provide a bit of public theater that will justify the huge contract -- and all the subsequent kickbacks it will generate. Big capital projects are always the answer, dontcha know.”

To view the original story, please use this link: https://gothamist.com/news/yes-mta-completely-flooded-subway-entrance-reason