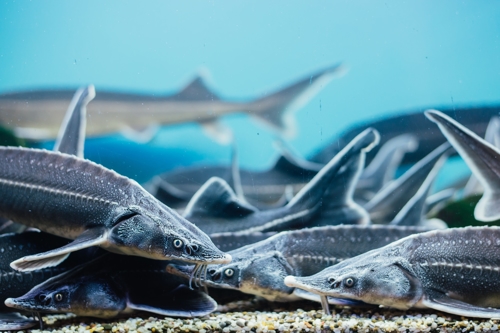 We found ourselves at KLAW, a “surf and turf restaurant,” located at 1737 North Bayshore Drive, right next to Margaret Pace Park. The building it’s in, known as Miami’s Women’s Club, offers floor-to-ceiling windows, with truly spectacular views of Biscayne Bay.
▫️
Our first course, the SEAFOOD PLATTER, (reviewed earlier), scored a “B-,” and lost points mainly because of the high price and miserly seafood portioning. Since we were enjoying the incredibly beautiful view, we decided to step up the decadence a notch and went with a caviar course. But despite two options being listed on the menu, we were told only the CALIFORNIA WHITE STURGEON – 30 g tin” ($110 pre-tax/tip) was available. (That was the first letdown.)
▫️
Described as “large, elongated and cylindrical,” the White Sturgeon, also known as the Oregon, Pacific, or Sacramento Sturgeon, can reach 20 ft (6.1 m) long, weigh some 1799 lb (816 kg), and, have lifespans of over 100 years.
▫️
Typically derived from farm-raised cousins, their caviar has platinum to brown hues and yields generously sized pearls. (You can pick up a one-ounce tin online for about $60, retail.)
▫️
Most times, with a caviar service, you can expect to see lemon wedges, sour cream and/or crème fraiche, egg yolks and whites chopped separately, accompanied by some minced onion and blinis. This offering only came with bread and some crème fraiche; and that was the second letdown. And since we found the pricing on the high side, this item scored a “C,” as in, you may want to see about “containing costly caviar consumption.”