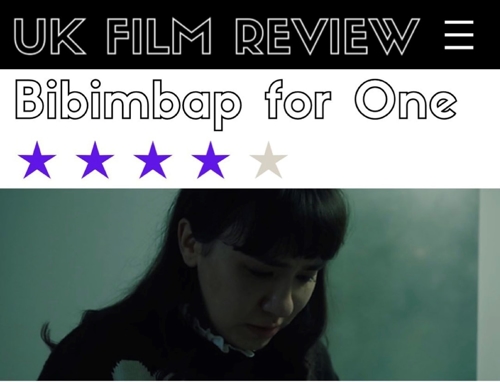 On September 7, 2022, Jason Knight, a film critic with UK FILM REVIEW, released this piece on BIBIMBAP FOR ONE, a new short film written by Brian Kaszas, and directed by Ella Greenwood of Broken Flames Productions (London).

We’ve taken the liberty of reproducing the text of his incredibly gracious 4-star review below. (You can also find it online here: https://www.ukfilmreview.co.uk/reviews/bibimbap-for-one.)

A young woman's decision to assist her neighbour results in a strong bond developing between them.

Hana (Kimbook) has just moved to a new property and is about to eat a meal when a kind, elderly neighbour named Bernard (Simon) knocks on her door and asks for help as he has accidentally locked himself outside of his own home. She offers him her assistance and the two of them end up spending the day together and get to know each other.

This short drama tells a moving story about two individuals who meet by chance and their encounter appears to be a life-changing one. One of the subjects is loss. Both protagonists have been affected by the loss of a loved one, however on different levels. Bernard's wife passed away a couple of years ago and he misses her and has come to terms with her passing. He is honest about it and tells Hana how he feels. Hana is struggling to deal with the loss of her mother, however she does not reveal to Bernard that she has passed away and even pretends that she is still alive. In reality, Hana is devastated by her loss and the arrival of Bernard into her life appears to make things better for her.

Although loss plays a big part in this story, the bright side of life is also present and the feeling of support is felt throughout. Watching the friendship that develops between them is quite heart-warming and over the course of the day they get to the point where they almost seem that they have been life-long friends. Simon plays a friendly gentleman who treats Hana with pure kindness and she does the same, although she is more reserved about her life and emotions.

The acting by both leads is very strong and the audience will most likely sympathise with the characters that they portray, as both Kimbook and Simon effectively bring their character's feelings to life.

Thanks to composer Gaby Ambler, this film has a beautiful and emotional score that includes wonderful piano melodies.

This short is heavy on emotions and explores themes that involve loss, friendship and support and it shows how two strangers can quickly become close. With terrific acting and sentimental music, this is an achievement that deserves a lot of praise.

Our sincerest thanks to Mr. Knight.  And we most certainly agree that much praise should go to our cast and crew, whose Instagram tags you'll find listed below.