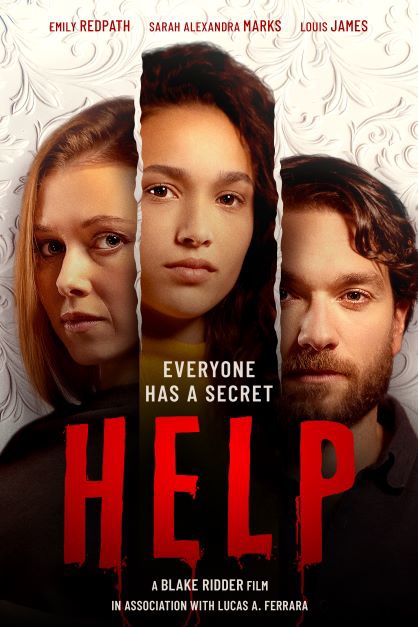 As author Sherrilyn Kenyon once noted, “Love is deceitful and sublime. In its truest form, it brings out the best in all beings. At its worst, it's a tool used to manipulate and ruin anyone who is stupid enough to hold it.”

That manipulation and all the other nuances and complexities we frequently see in relationships are examined in HELP, a feature film written and directed by Blake Ridder.

In this thriller, friends are initially enjoying their time together in an idyllic English countryside manor, but things slowly devolve into chaos … as deep, dark secrets are exposed.

As FILM THREAT reviewer Alan Ng noted, “Help is a morality tale of a love triangle gone wrong.” In it, we follow a “’loving’ couple, high-powered lawyer Ed (Lewis James) and his loyal girlfriend, Liv (Sarah Alexandra Marks).” But it’s Liv’s best friend, Grace (Emily Redpath) who is the film’s protagonist and “the story is told through her point-of-view.”

Admittedly, the movie starts off slow, as the characters are developed. But, as Alan notes, it suddenly kicks into high gear and “everything unravels, focusing on Ed’s drinking and the safety of Grace and Liv. We’ve seen this story before, but there’s a massive twist that I can’t even hint at. It works, makes sense, and changes everything you’ve seen up to that point.”

Given that this project was filmed in the midst of the COVID-19 pandemic, with all its social distancing and other limitations, the cast and crew pulled off quite an amazing feat here.

To watch this movie, for FREE, please use this link: https://tubitv.com/movies/678117/help

After all, in these challenging times, who couldn't use a little HELP?