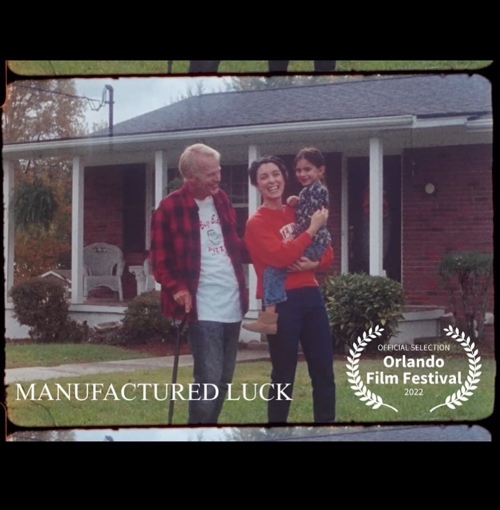 Recognized as being among the Top 25 “Coolest Film Festivals in the World,” the ORLANDO FILM FESTIVAL (OFF) – which is now in its 17th year — showcases “the best in new independent cinema from around the world.” Over the course of eight days, over 300 films, industry panels and workshops will be presented, with the event concluding with the award of prizes valued at over a million dollars.
▫️
We’re honored that MANUFACTURED LUCK — a short written and directed by Kevin Keck, an East Tennessee-based creative — has been selected to screen at this year’s festivities. In this story, which “blends traditional Appalachian storytelling with film,” we’re introduced to a young girl and her grandfather, who happens to have an affinity for contests, church raffles, and all things sweepstakes. And we follow the exploits of these “two introverts from vastly different generations trying to bond.”
▫️
If you are into emotional and heart-warming messages about love and family, then join us at an upcoming screening at OFF, which is being held from October 27 – November 3, 2022, at CMX PLAZA CINEMA CAFÉ, 155 S. Orange Avenue (Orlando).
▫️
For addition information, please visit: https://www.offvirtual.com/
▫️
In the meantime, we not only extend our sincerest thanks to OFF, but to our hard-working team of creatives from The Volunteer State.  (Their Instagram tags follow.)
▫️
CREW:
@b_evans24 - Producer, Brandon Evans
@tyleroxendine - Producer, Tyler Oxendine
@kevinckeck - Director, Kevin Keck
@_adamchapman - Director of Photography, Adam Chapman
@carrieferrelli - Production Design, Carrie Ferrelli
chelseyspaige - Costume Design, Chelsey Paige
@thatvintagedarling - Editor, Breeana Kovelman
@yeemeister, @truepeaksound - Sound Design, Shaun Yee and True Peak Soundworks
@robertmai107 - Composer, Robert Mai
@drnewport - 1st Ass’t Director, Hampton Newport
▫️
CAST:
@peteman.7 - Jim, Peter Aylward; Ash, Azra Basile; @ameliabartlett - Lilly, Amelia Bartlett
▫️
Wish us LUCK!!!