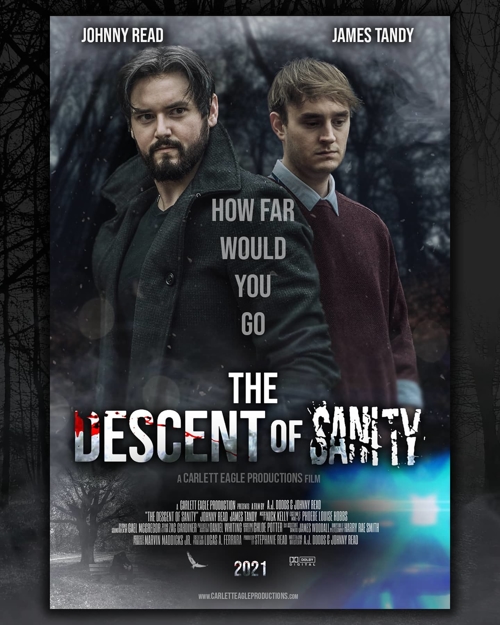 What would you do if your child were abducted? How far would you go to get your kid back?
▫️
Those are just some of the questions tackled by “THE DESCENT OF SANITY,” a new feature-length film written and directed by A.J. Dodds and Johnny Read.
▫️
I was enticed by the premise of the movie — which involves a father who is tormented by his daughter’s disappearance, and then abducts the person believed responsible for the child's kidnapping. The team sets out to explore “the duality of a man,” who on the one hand is “the protector, the father, yet finds himself thrust into the role of judge, jury and executioner.”
▫️
This gripping drama seeks to address “real issues and circumstances.” And, as you can see from the “teaser,” which the production recently released, it promises to be an engrossing film.
▫️
To learn more, visit: https://www.carletteagleproductions.com/the-descent-of-sanity
▫️
While the production is currently underway, I can’t wait for "THE DESCENT OF SANITY" to ascend to the big screen! In the interim, my sincerest thanks to the entire cast and crew for their colossal efforts here. (Their Instagram tags follow.)
▫️
Cast
@_johnnyread_
@jamesstandyy
@staceyedwardharris
@hannahellisryan
@aliceloftus_
@marcorobinsonnow
#
Crew
Co-Writers/Directors/DOP - @ajd_writer and @_johnnyread_
EP – Yours truly
Producer - @_stephread
APs - @nightmistful / @staceyedwardharris
First AD - @potpotpotter
First AC - @dannywhiting
Add’l Photography @woodsmithproductions
Script Supervisor - @rosn333
Sound Design - @callumkilgarriff
Sound Op - @skeletalkeys
SFX Makeup - @chloeb_sfx_mua / @plhartistry
Costume Design - @dean.908
Composer - @nick_kelly_music
Editor - MJ Hellbeck
Stills Photog - @sarahallenphotography_ / @santafe_photography
PA - Fern Pallister
Original Song by - @gaelmcgmusic
.
.