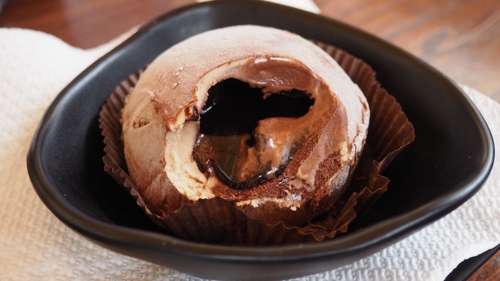 Even though our dining experience at Polpo Palm Beach — which you’ll find at Eau Palm Beach Resort & Spa, 100 South Ocean Blvd, Manalapan (Florida) — was “spotty,” we stayed for dessert, so that we could get rid of the salt lingering in our mouths from the “Chicken Campagnola,” (reviewed the other day).
▫️
All things considered, the prices for their sweets weren’t that bad. By way of example, for $9 (pre-tax/tip) you can pick up some house-made ice cream, or some sorbet, or, for $12 (pre-tax/tip), you can choose from six other desserts, such as the Italian Ricotta Cheesecake, Bread Pudding, or Chocolate Cake Napoleon. After some debate, we opted for the “Tartufo – Chocolate Covered Vanilla Ice Cream, Cherry Centre” ($10 pre-tax/tip).
▫️
Some believe you’ll find the greatest ice cream in the world, in the Calabrian city of Pizzo, which is in Southern Italy. Now, urban legend has it that in the 1950s, Guisseppe De Maria, a/k/a “Don Pippo,” had been hired to whip up some desserts for a VIP wedding. And, when he ran out of cups for the service, he decided to shape ice cream into balls (which contained a filling of melted chocolate), dusted them with sugar and cocoa, (giving them an enlarged, truffle-like appearance), and named them, “Tartufi di Pizzo.”
▫️
Surprisingly, the version we got was a visual mess. Not only was the chocolate shell cracked, but it showed some freezer burn. While the US Department of Agriculture notes that that (alone) doesn’t make the item unsafe to eat, improper freezing can impact taste and texture, and can explain why the covering tasted slightly “off.” And even though the enclosed chocolate and vanilla ice creams didn’t offend, we thought they lacked complexity and depth, which caused this thing to score a lowly “C.”
▫️
And that’s the scoop.