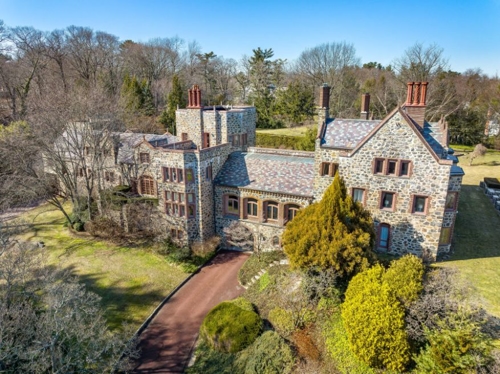 A New England luxury home, with remote ties to the “Great Bambino,” recently sold for $10.4 million.

The Hemlock Castle in Greenwich, CT, once owned by Boston Red Sox owner Harry Frazee, was originally constructed in 1913 by famed architect James Green. The magnificent estate sits on over four acres of manicured grounds, with the eight-bedroom main home measuring over 13,500 sq. ft.

And while the property underwent an extensive renovation in the 90’s, keen attention was paid to ensure that the historical details and craftsmanship, which made the home exquisite, were kept intact, while also adding a bright, contemporary aesthetic wanted by modern-day buyers.

Entering via the circular cobblestone walkway, you’ll step through detailed wrought-iron gates into the main home, which sports ultra-high ceilings and large windows, allowing natural light to fill every crevice of the mansion. 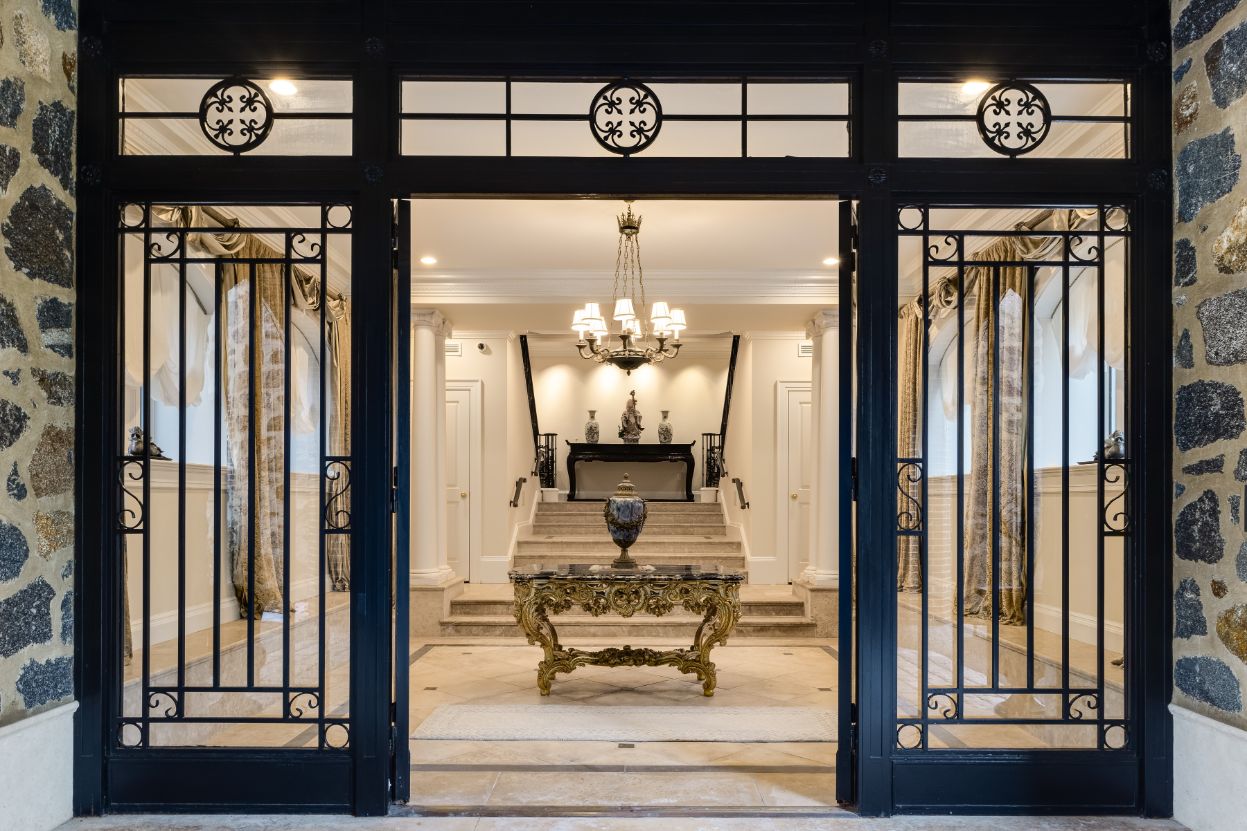 The foyer is wrapped with intricate marble stonework and ionic columns, and from there the home opens into a myriad of living spaces, each more impressive than the last. 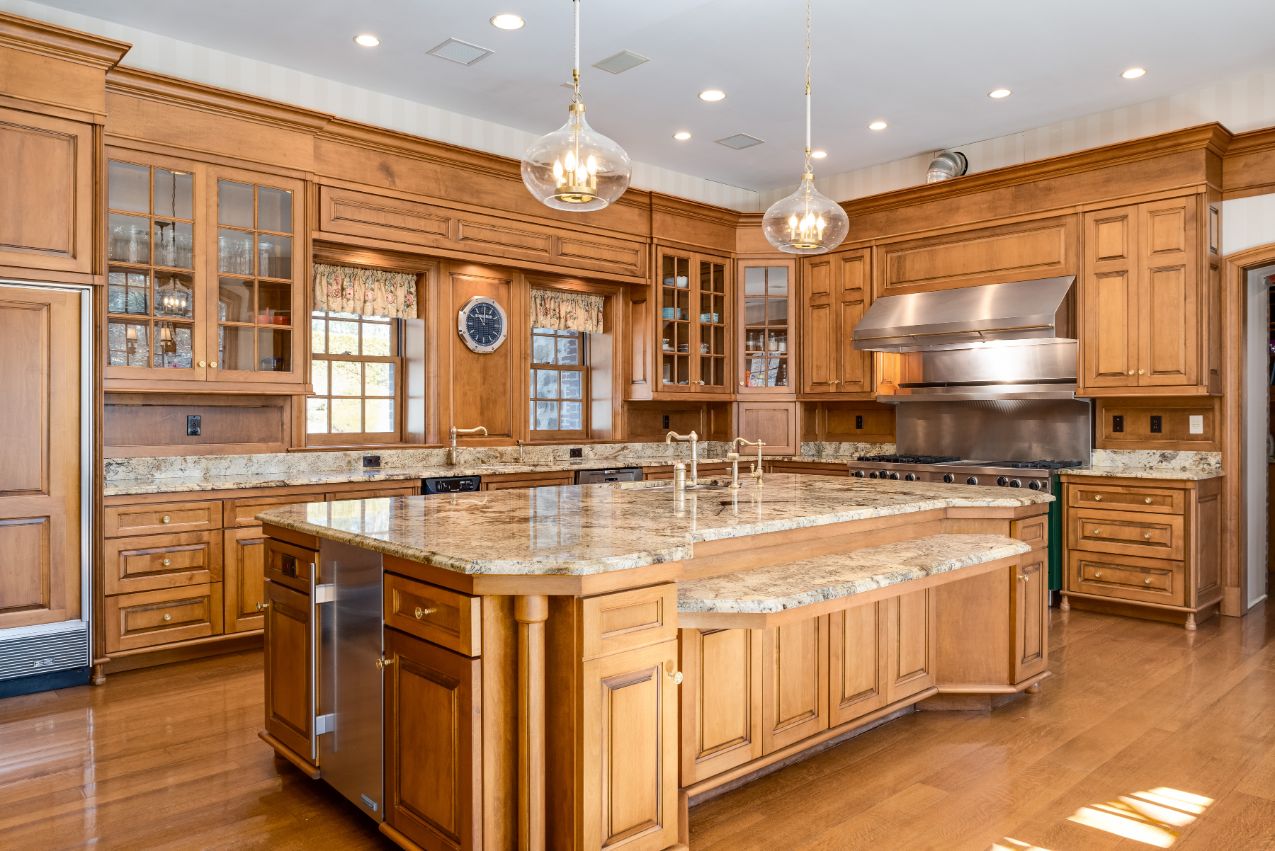 The chef’s kitchen has a monstrous granite-island, perfect for dining and entertaining, as well as a professional-grade gas range, breakfast nook, and appliances finished to blend into the detailed wooden cabinetry. 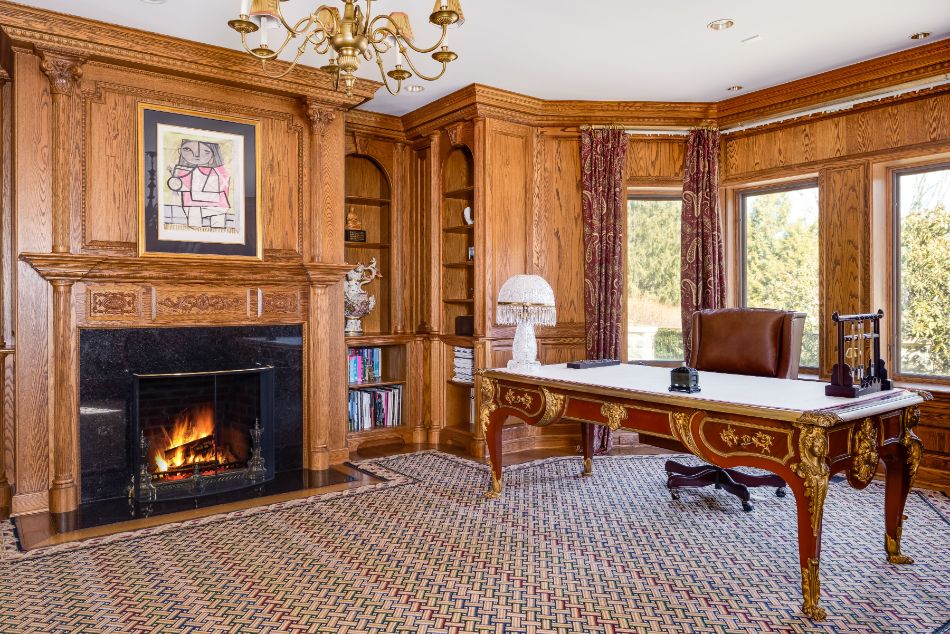 The study is timeless – featuring a large, wood-burning fireplace (one of eight), a full wet bar, and walls cladded with oak paneling and striking crown-moldings. 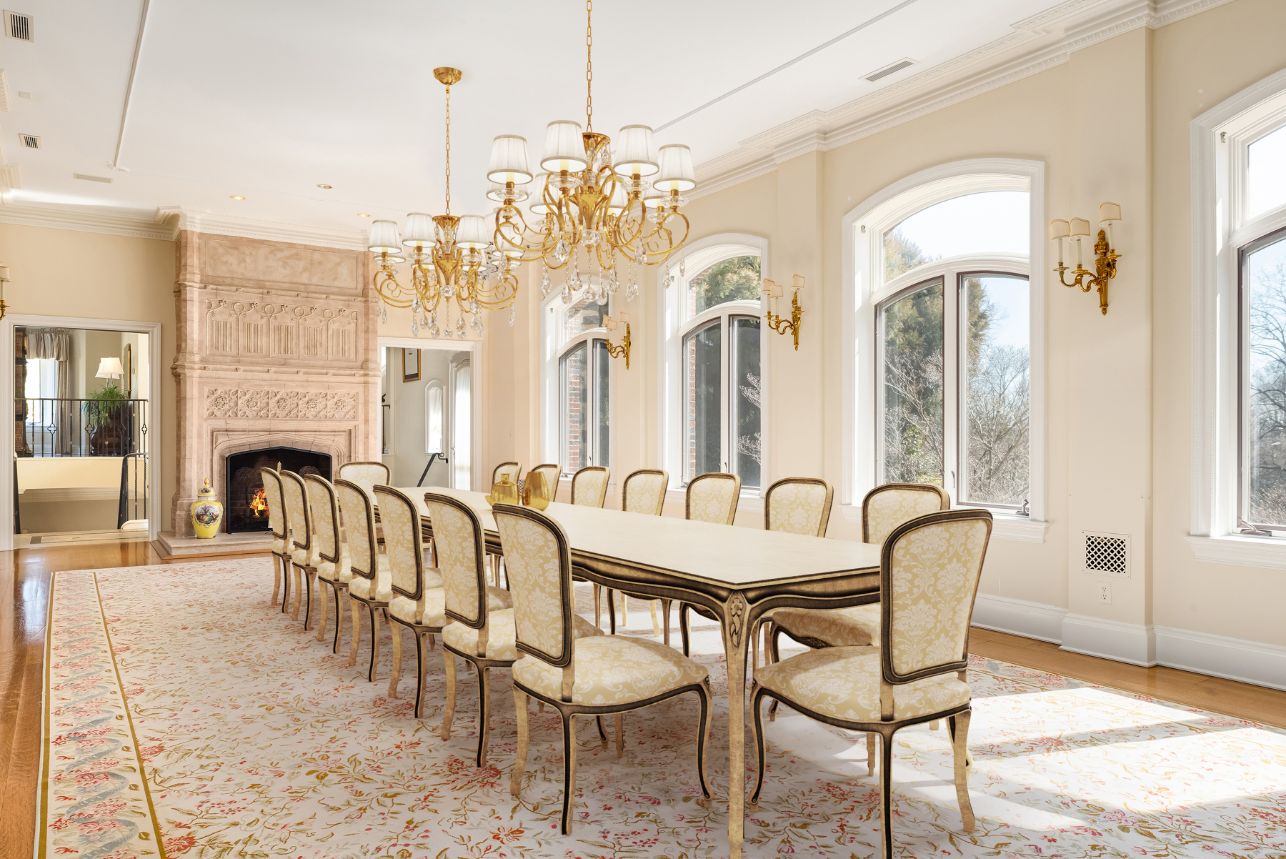 The formal dining room comes with large windows which overlook the grounds, and opulent chandeliers dangle over an antique table with seating for 16. The grand limestone fireplace puts the finishing “Gatsby-esque” touch on any dinner party. 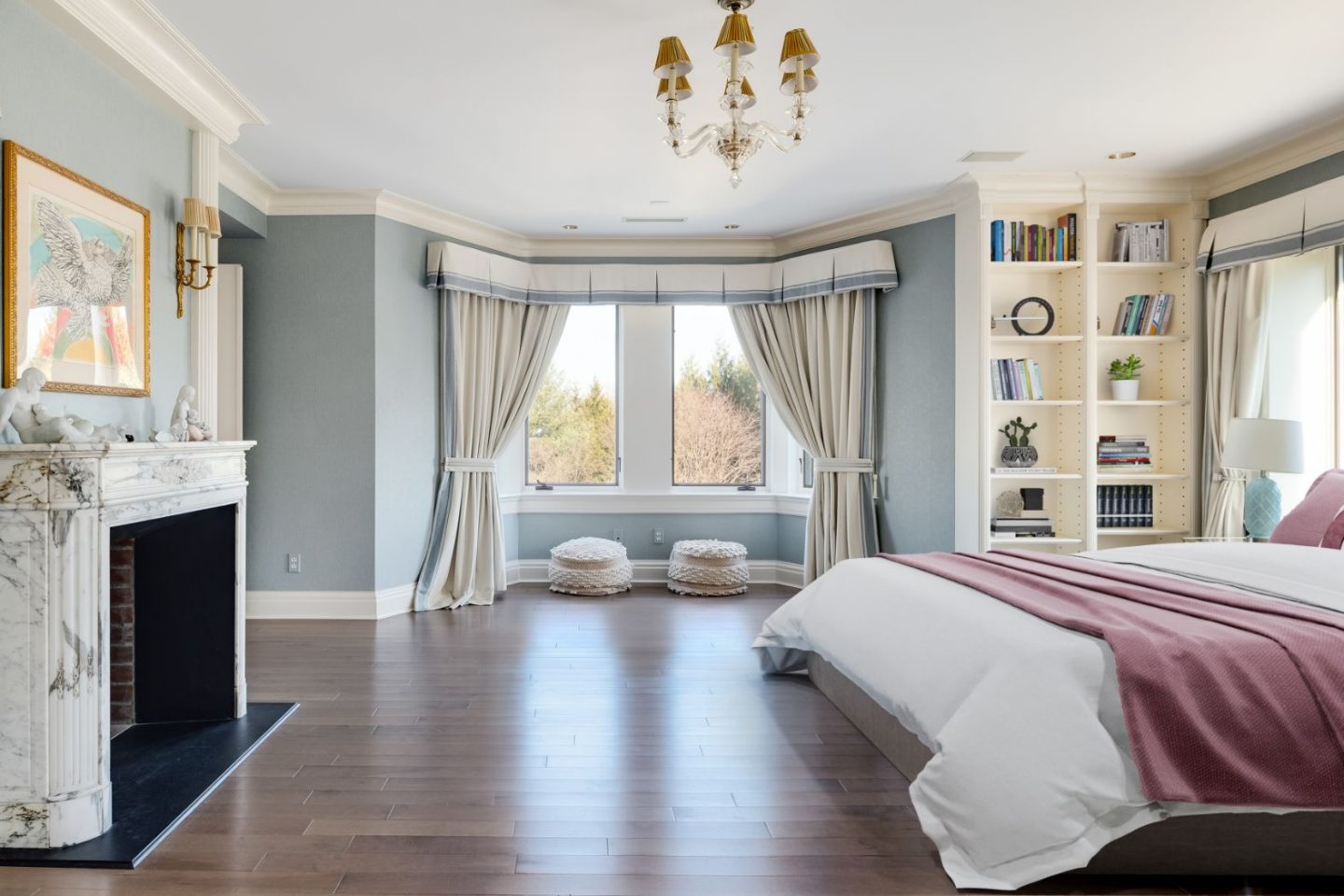 On the third floor, a primary suite has double walk-in closets, a dressing room, a sitting room with fireplace, and his-and-her bathrooms equipped with a Jacuzzi. The master suite is even more impressive, and provides sweeping views of the Long Island Sound. 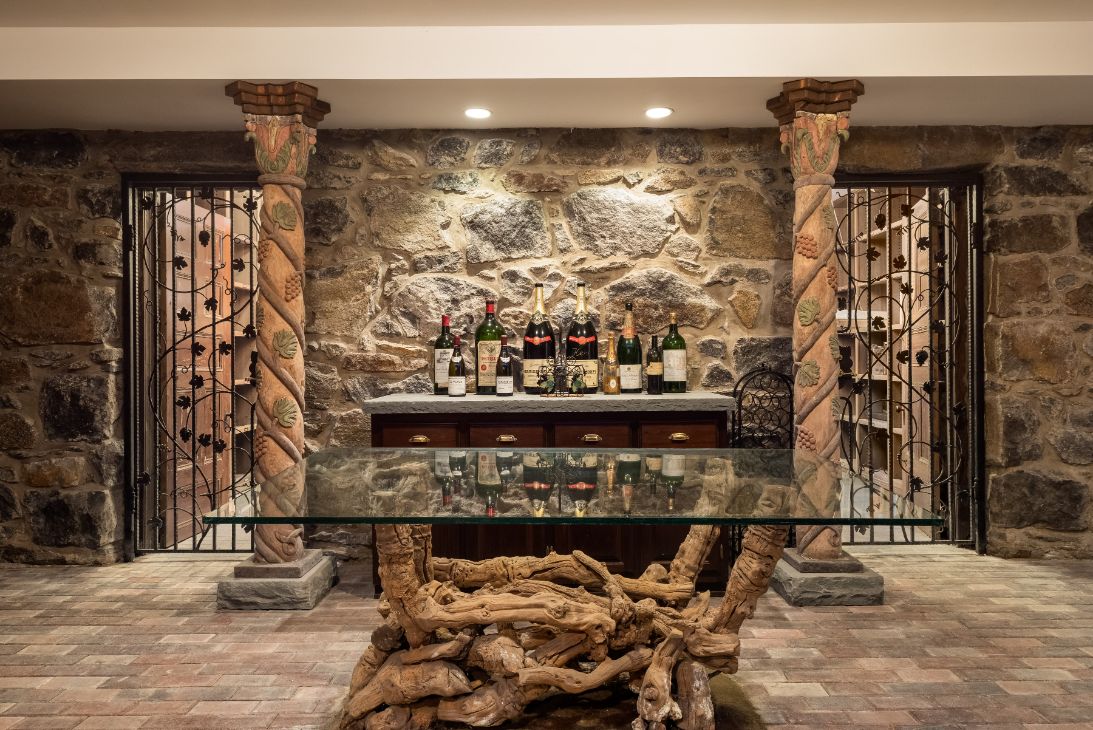 The home also comes equipped with a wine cave which can store over 10,000 bottles of your favorite vino and, after you grab a few bottles, you can head over to the high-tech movie screening room and theatre. 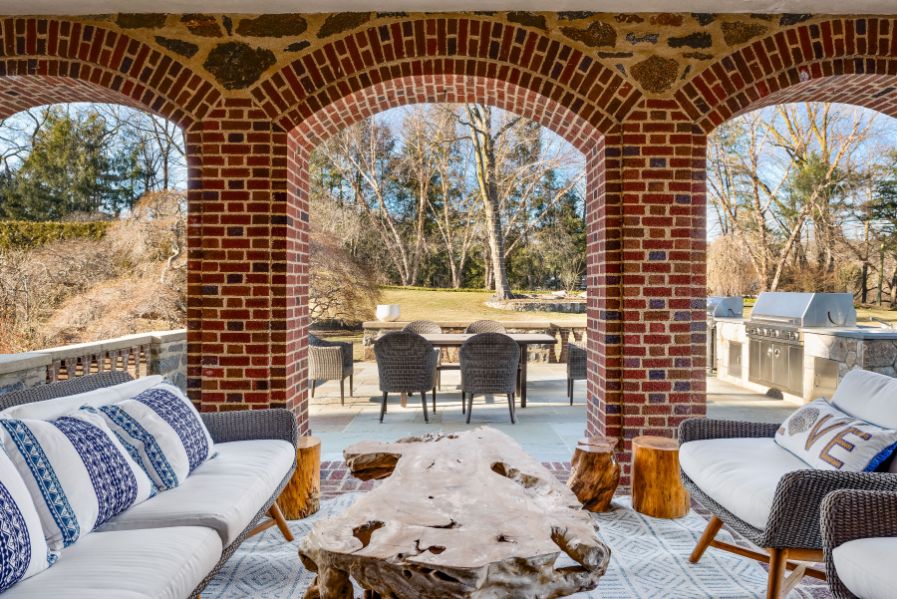 Leading outside through carved-stone archways, an expansive veranda provides panoramic views of the grounds, and comes equipped with a large seating area, and an outdoor BBQ grill and kitchen.

Perched atop a hill, the home enjoys unparalleled views of the Sound and surrounding grounds, but with enough buffer to enjoy the privacy of one of Greenwich’s most desirable neighborhoods. Located minutes from the downtown area, the home sits in close proximity to luxury shopping centers, the famous Bruce Museum, and the Indian Harbor Yacht Club. Some notable Greenwich neighbors include Regis Philbin, Mel Gibson, and Glen Close.

Frazee -- notorious for his 1920 decision to trade baseball legend Babe Ruth to the New York Yankees, in order to finance a Broadway musical -- was credited with single-handedly triggering an 84-year hex on the Red Sox baseball team, which didn’t win a World Series title until 2004.

The deal was closed by Stephanie Bo Li of Douglas Elliman.