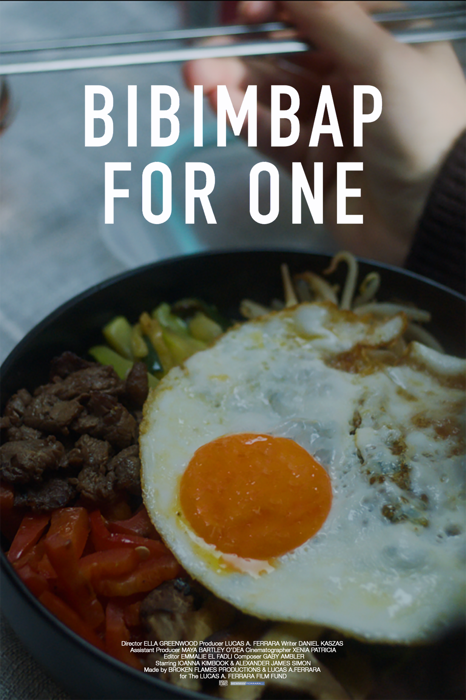 Jason Knight, a critic with UK FILM REVIEW, recently reviewed BIBIMBAP FOR ONE, a short written by Brian Kaszas, and directed by Ella Greenwood of Broken Flames Productions.
▫️
Knight noted, in part: “Although loss plays a big part in this story,the bright side of life is also present and the feeling of support is felt throughout. Watching the friendship that develops between them is quite heart-warming and over the course of the day they get to the point where they almost seem that they have been life-long friends ….”
▫️
He continued, “The acting by both leads is very strong and the audience will most likely sympathise with the characters that they portray, as both Kimbook and Simon effectively bring their character’s feelings to life.”
▫️
And Knight concluded, “This short is heavy on emotions and explores themes that involve loss, friendship and support and it shows how two strangers can quickly become close. With terrific acting and sentimental music, this is an achievement that deserves a lot of praise.”
▫️
Much praise must certainly go to our cast and crew:
▫️
CAST
@ioannakimbook
Alexander James Simon
▫️
CREW
Director - @popsella
Writer - @daniel.kaszas.97
Producer – Yours truly
Asst Producer - @maya_bod
DOP - @xeniaxpatricia
Editor - @editor_emmalie
Composer - @gabyamblercomposer
Colourist - @chris.shaw.colour
Sound Design - @_inesadriana_
Casting - @frankie_fearis12
Makeup - morganemakeup11
Costume Design - @tegantime
Production Design - Junting Yang
1AD - @esmeehuguenin
1AC - @oscarharrisonfilm
2AC - @nizah_e
Sound Recordist - @rufusambler
Gaffer - @zetaspy
Spark - Wenxuan Xu
BTS photos - @ines_hachou
Consulting Producer - Brent N Hunter
▫️
Our thanks to Mr. Knight and to UK FILM REVIEW.
▫️
You can find the full review here: https://www.ukfilmreview.co.uk/reviews/bibimbap-for-one
▫️
(I guess it’s ciao-time!)