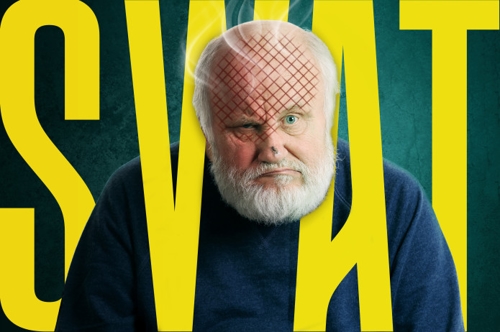 Did you know that about 120,000 species of flies share the planet with us?

And you can reportedly find16,000 different types parked right here in North America, while about 7000 species call the U.K. home.

Because they’re indiscriminate about where they land, these insects can leave disease-causing organisms which have been known to cause bloodstream infections, diarrhea, food poisoning and meningitis, and can carry pathogens which spread cholera, bacillary dysentery, hepatitis, and typhoid fever.

And if that weren’t enough, some can even inflict painful bites on both humans and animals, alike. So, it should come as no surprise that most view these pests with considerable disdain -- particularly when they barge into our households.

Hence the premise of “SWAT,” a new comedy written and directed by Sam Coombes, a Bristol, U.K., resident. In his film, we witness an elderly gentleman going to considerable lengths to kill a pesky fly; not only damaging his personal property but gravely injuring himself in the process. As Sam puts it, it’s “an explosive territorial brawl between man and beast. But who will be victorious?”

To find out, you’ll need to help Sam get this project realized. And to that end, he’s started a crowdfunding campaign where you can score such perks as an acknowledgment on social media, storyboard frames signed by the cast and crew, behind-the-scenes photos and video, a virtual screening and Q&A, film props, tickets to a festival screening, your name in the end credits, to having your face appear in the body of the film.

Wanna be fly? Take a shot on SWAT!

To check out some of Lucas's other projects, please visit:  https://www.imdb.me/lucasaferrara