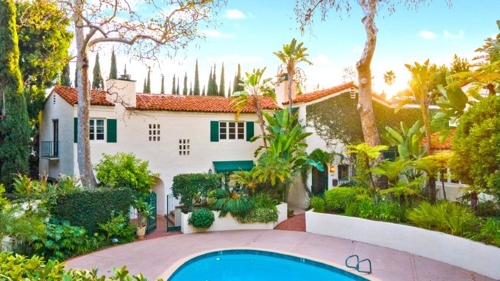 We Ain't in Kansas …. Not at This Price

A new Los Angeles residential property has recently hit the market, and is associated with a bit of cinematic history.

Once home to Margaret Hamilton, the famed “Wicked Witch of the West,” this 3,035 square-foot villa, located just a stone’s throw away from Hollywood’s Sunset Strip, sports a $2.4 million dollar price tag.

Most famously known for her iconic rendition of the green colored, hook-nosed villain in the American classic, The Wizard of Oz, Hamilton had an impressive career in show business which spanned nearly 5 decades – and starred in numerous films, television shows, and radio appearances.

As for the house, she purchased the largest one in the Courtney complex back in 1939, marking her territory in “lala land” (well before the popularity of the Golden Age of movies arrived in the 1960s). And while Hamilton spent most of her time on the East Coast, ultimately dying in New York in 1985, she enjoyed quite a bit of the Hollywood scene from her impressive pad.

Constructed in 1926 by architects George J. Adams and Frank H. Harding, the 3-bedroom, 3.5 bath residence features an open concept which includes a number of oversized windows which allow for maximum sunlight.  Of course, the home also comes equipped with a full living room, dining room, screening room, and a private terrace and roof-top deck. Through the French doors you can walk outside to the backyard area, overlooking plush gardens and a fountain. The residents of the complex, which is now dubbed a Los Angeles Historic Cultural Monument, share a community pool and cabana, though the villa has its own private gated entrance and garage.

Jill Galloway, for Compass Real Estate, currently holds the listing: “You walk in and you expect to see Joan Crawford at the pool,” Galloway said. “It looks very much like the Beverly Hills Hotel or something out of Cary Grant’s home movies. It’s just so old school.”

The current owners, both prominent figures in showbiz themselves, renovated and restored the home with a contemporary style after they purchased it for $1.86 million in 2016.

Hopefully, the new owners will live up to the villa’s Hollywood legacy.

(Do you think they will keep it in broom-clean condition?)

Photos of the Witch’s pad can be found here: