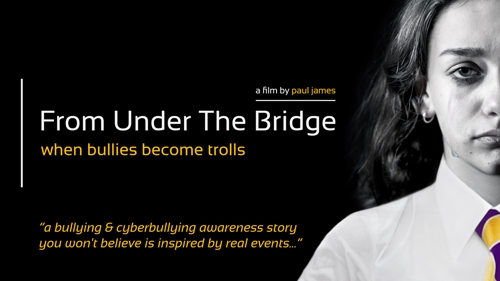 It’s a plague – an evil – that frequently goes unreported and flies “under the radar.”

But “bullying” – according to the Centers for Disease Control and Prevention – is a form of “youth violence” which is often given short shrift. The objectionable conduct ranges from “unwanted aggressive behavior” to any “observed or perceived power imbalance” which inflicts “physical, psychological, social and/or educational harm.”

The underlying statistics are terribly daunting. Here in the U.S., for example, one in five high school students have encountered incidents of kicking, hitting, screaming, spitting, tripping, punching, and/or pushing, while some 15% were harassed electronically: online or by text.

Given those underpinnings, when I heard Paul James was doing a film on bullying and cyberbullying, I had to get involved.

“FROM UNDER THE BRIDGE,” recounts the story of a high school student trying to navigate through her depression (triggered, in part by the loss of her mom and the constant attacks she faces at the hands of her classmates). Per chance, she encounters a caring teenage boy, who offers the prospect of lifting her from the darkness and changing her life’s course. But is all as it seems?

This captivating and mesmerizing tale will keep you at the edge of your seats … particularly if the production team doesn’t secure the funding it needs to complete this film.

For a limited time, in exchange for a contribution to his crowdfunding campaign, Paul will be offering you exclusive behind-the-scenes footage; online chats; lunch with the writer/director/producer; autographed badges, ties and backpacks (used by the actors); mention in the end credits; and, even a cameo appearance. But you must act quickly.

For additional information visit https://www.seedandspark.com/fund/fromunderthebridge#story or the production’s website http://dreamotionstudios.com/

And should you decide to join us, well … bully for you!