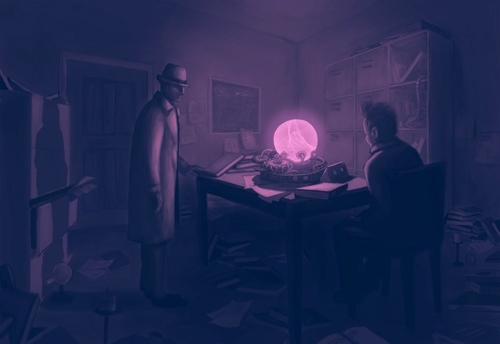 As I was surfing the web, I came across a project, written and directed by a guy with a very, VERY, strange name.

It was so foreign and unusual, that I had to stop and wonder whether I was hallucinating.

(At first, I thought it was a figment of my imagination.)

But, lo and behold, “FROM BEYOND” -- a short film based on H.P. Lovecraft’s short story of the same name – is written and directed by a guy in London, England, who happens to go by the name “Luca Ferrara.” (That’s right. Luca Ferrara. And, of course, “Luca” just so happens to be my name, in Italian, as well. Go figure!)

But he isn’t me. And I am not him. As this younger Luca Ferrara was born and raised in Italy, attended the Liceo Classico Arnaldo, and later moved to London to attend the University of Westminster’s Film School.

Luca’s latest project is set in 1944, and our protagonist, a US Army Intelligence Officer, is on a secret mission to engage with a mad scientist that has created a device that can connect our world with a “darker, unexplored dimension.” Of course, if that machine were to get into enemy hands, it could not alter the course of the entire war but human history.

Scheduled to be shot in Northern Italy and Scotland this coming winter, the project promises to offer a unique blend of three different genres – a thriller, war movie, and horror flick -- ensuring an outcome that is certain to have mass appeal.

Unfortunately, as you already know, COVID has put a crimp on all things creative, and Luca needs funding to get this project completed. And to that end, he has initiated a crowdfunding campaign on Kickstarter where you can score some neat goodies, in exchange for your contribution. The team is currently offering production updates, a link to the soundtrack, behind-the-scenes exclusives, printed artwork, stickers, posters and t-shirts, and even a prop from the film.

Let imagination run wild and help make “FROM BEYOND” … a reality.