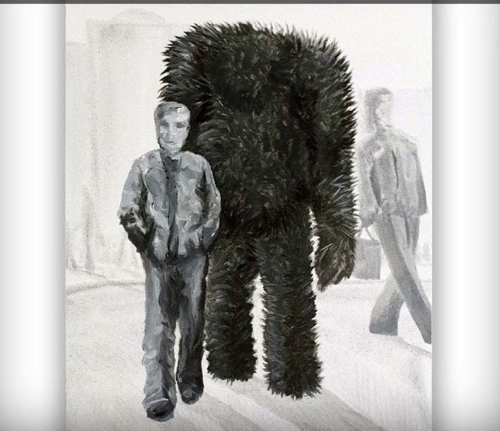 The National Institute of Mental Health (NIMH), and the World Health Organization (WHO), estimate that some 300 million people across the globe suffer from depression -- with some 16 million of those adults living in the United States; about 7% of our country’s population.

Many feel it’s a crisis which isn’t getting the kind of attention it deserves. And given that backdrop, when I heard that Mike Pedley was working on a short film on the subject, I was immediately compelled to get involved.

“HANK – A Short Film About a Big Problem,” follows a day in the life of “Luke,” a guy in his late 30’s, who is plagued by an 8 foot -- extremely hairy -- monster, named “Hank.” (The latter, of course is a nuisance; an annoyance fueled by Luke’s negative thoughts and is a manifestation of his mental state.)

Pedley wanted to “make a film that people who suffer from depression and anxiety can relate to … and encourage understanding in those who don’t.”

The project’s goal is to “raise awareness in a way that transcends boundaries, borders, and boxes.” But given the economic challenges posed by COVID, this admirable endeavor may not see the light of day without our help.

By supporting this crowdfunding campaign, you can score some unique “perks,” including feedback on a script you may be working on, some original “Hank” concept art, or get your name mentioned in the film’s credits.

To learn more about the project, please use this link: HANK

Together, we can bring to millions in distress … a glimmer of hope.