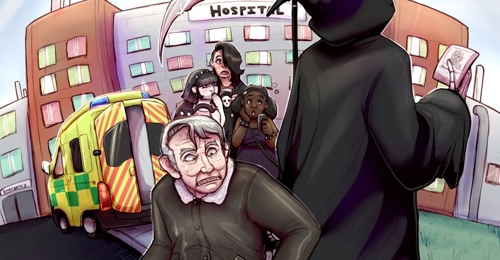 And, if you ask me, the formula is getting a bit “tired.”

But don’t give up on the genre, just yet … as some filmmakers from Yorkshire (northern UK) are offering a different twist. In "The Grim Reaping of Harvey Grieves," a new short, written by Alice Lassey, and directed by Peter Trifunovic, we track the flight of an elderly man who seeks to dodge “Death.”

The plot promises a unique high-stakes chase, which will require our lead character to use every means at his disposal -- including a wheelchair, an ambulance, and the local #17 bus. Suffice it to say, it’s an original comedy that sets out to give the Grim Reaper, “the runaround.”

Ironically, film financing is also extremely elusive, particularly in this unprecedented economic climate, so the team has started a crowdfunding campaign, where in exchange for your hard-earned cash, they’ll reward you with links to the finished film, a signer poster, and official Harvey “merch” – like a hat and hoodie. You can also join the crew for lunch, score premiere invites, and get an acknowledgment in the film’s credits. (And, if you’ve got about $6660 to spare, they’ll even throw in the actual “hand(s) of Death.”)

Woody Allen -- a noted American writer, actor and film director --  is said to have observed that, “The difference between sex and death, is that with death you can do it alone and no one is going to make fun of you.”