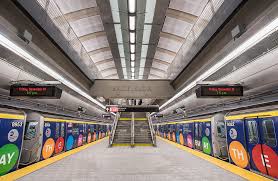 New York City is getting weirder with each passing day.

On January 31, protests were held by some petulant children, who glued up some Brooklyn turnstyles so that people couldn’t swipe their cards. While on the Upper West Side, a station had its walls marked up with graffiti. And what triggered this craziness, you ask? Well, the alleged “over-policing” of the subway system.

Apparently, some unhinged ones believe that they should ride for free. And the organizers, known as “DecolonizeThisPlace,” used unequivocal language to express their mindset on Twitter. “The streets are ours. The trains our ours. The walls are ours. This moment is ours,” the group wrote. “How will you and your crew build and f*** s*** up for #FTP3 on #J31 (THIS FRIDAY)? Issa mothaf****’ movement.”

The tweet later expressed displeasure with police patrols of the subway, as well as the $2.75 fare. (The organizers advised participants not to wear belts, and to refrain from bringing any weapons or drugs with them.)

Sadly, no arrests were made.

“This is how pandemonium begins,” noted Jonathan H. Newman, Managing Partner of Newman Ferrara LLP. “These ‘protests’ are intended to disrupt the lives of law-abiding New Yorkers – who are just trying to get to their respective destinations, as quickly as they can, without needless disruptions. This kind of lawlessness must be stopped,” he continued.

“If these protestors truly wish to effect change, causing mayhem and destroying public property are not the ways to do it. In fact, by resorting to violence, they become part of the problem, rather than part of thesolution,” Newman concluded.