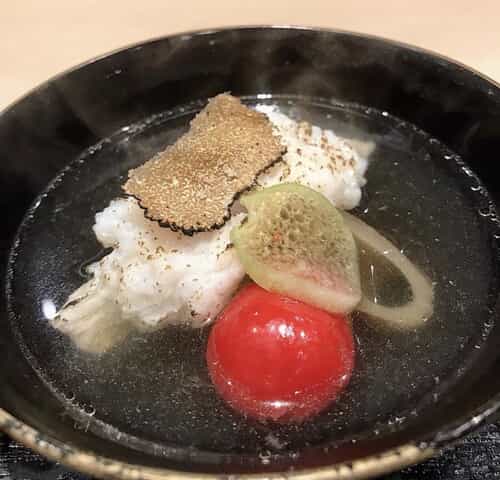 Chef Yuuki Tanaka, described by some as a “culinary prodigy,” has a small place in Tokyo, called “Ise Sueyoshi” (4-2-15 Nishiazabu, Minato), where his “thing” is “kaiseki” — a traditional Japanese, multi-course meal which will run you about $150 (U.S.) per person.

Next up, Chef Tanaka presented us with some “dashi” — which the menu described as “special soup stock” designed to “bring out seasonal flavor and aromas.” 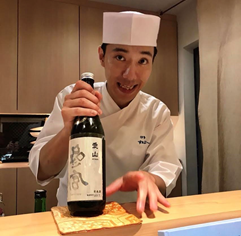 While we understand this soup is relatively easy to make — because it primarily consists of water, kombu (dried kelp), and bonito fish flakes — what made this offering unique was the “Hamo(鱧),” “pike conger eel,” and the “eggplant, truffle, stem of yam” that were added to the mix.

Now, this was our first time trying this particular kind of eel — which is as an extremely unattractive bottom-dweller that can extend to over 7 feet in length. Because it contains many pin bones, the work is in the filleting and prepping the fish for human consumption.

Despite our initial trepidation, after we took our first sip and bite, we were blown away by the bold, rich flavors. Since the eel offered a nice, soft chew, and a meaty, pork-like flavor, which paired well with the slightly briny broth and subdued sweetness of the sake, this dish rated yet another “A.”