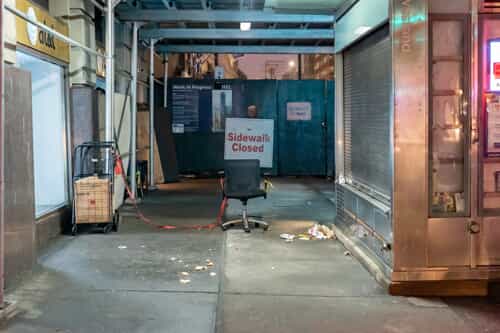 According to a new study released by New York City Comptroller, Scott M. Stringer, retail vacancies have doubled in the New York City area over the last decade.  Pursuant to his office’s analysis:

The New York Post reported that Stringer believes “we have a retail vacancy crisis in our city.”  He continued, “We need our city government to act fast and in a much more coordinated fashion.”

The Comptroller’s study placed the blame on Amazon, and the increasing reliance on shopping via the World Wide Web.

While physical storefront shopping businesses decline, Amazon sales are rising dramatically – with sales increasing from $14.8 billion in 2007, to over $177 billion some ten years later.

The Comptroller’s spokesperson, Mary Cao, believes that the outdated zoning regulations are creating issues throughout the city. “The regulatory hurdles and outdated zoning processes are leading to this increased vacancy by shutting out retailers and restaurateurs,” she claims.

In SoHo, for example, where parts of are zoned for manufacturing, the City’s review process for a new store or restaurant can take up to three years.

But the outer boroughs are taking the biggest hit, with Staten Island zip codes getting zonked the hardest in “both vacant square footage and vacancy rates.”

Comptroller Stinger wishes our local government would step up and not neglect this growing vacancy epidemic.  Taking a swipe at Mayor de Blasio, Stringer added, “I want him to come back and govern the hell out of this city.  We want our mayor to come and lead, that’s why he’s the mayor.”