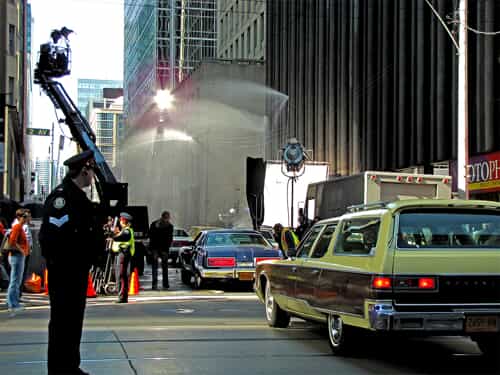 “No city resident should feel they are living in the parking lot of a Hollywood film shoot,” says Councilman Mark Gnojaj.

On September 16, the New York City Council held a hearing on new legislation that would address the issues residents are experiencing with the increasing number of movie shoots on the streets. Some of the main complaints include fewer parking spots, no space for large trucks to stand idle as they make deliveries, and the excessive crowding of the roadways and sidewalks.

The last decade has generated a virtually endless number of movie and television productions, many of which are also being produced for streaming services such as Netflix and Amazon. As Crain’s reports, “more than 70 movies and TV shows were actively shooting here [on] October 1.“

In response to this escalating demand, the City Council is currently reviewing some 13 bills that would make it more difficult for films crews to utilize City space. Some of these proposed measures include:

Of course, some are questioning whether these new laws are even necessary. Film industry advocates have reminded the Mayor’s Office that studios and production companies contribute approximately $9 billion to the local economy, each year. And an independent study shows that close to 60,800 jobs are supported by the industry. But will all that outweigh the needs of residents and businesses?

Robert Holden, a Queens Councilman, testified that a shoot of Showtime’s hit series Billions, was “the straw that broke the camel's back,” since the production team caused gridlock in the Middle Village area.

“I had so many businesses call me and say, ‘How dare the city schedule a film shoot right before Christmas’,” Holden said. He continued his testimony by noting that store owners lost at least $15,000 in revenue as a result of that activity.

Advocates for the film industry believe all of these concerns can be addressed with improved communication, and that the new laws will likely prove problematic. Angela Miele, a Vice President of the Motion Picture Association of America, observed that “if we are unable to comply with [the legislation], you are going to see productions fleeing the city. That is certainly not what we want to happen.”

Let's hope local politicians don’t want that to happen, either. (But after the whole Amazon debacle, we are certainly not holding out much hope.)