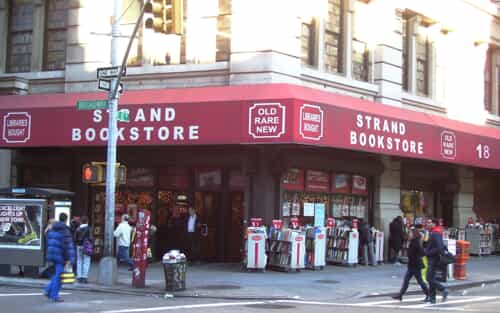 “On June 11th, the Strand was designated a landmark. We did not want this. We fought against this. We promised to take this to grassroots level. Today, we start that fight.”

That statement was posted on the main webpage of the historic Strand Bookstore, located in New York City.  While landmark status is usually something that is celebrated, the owners of the Strand were displeased.

Even though it was designated a landmark because the bookstore reflected “the history and importance of Broadway’s development south of Union Square,” the owners of Strand believe this decision now places their business in considerable jeopardy

Bass Wyden, the attorney for the bookstore, argued that this decision would “destroy the Strand by adding more bureaucracy and unnecessary expenses and restrictions,” as Crain’s New York recently reported.

Urbelis will essentially lose final say over important decisions regarding her store’s maintenance and upkeep, for once designated a landmark, certain alterations, improvements and repairs, must first be approved by a local Landmarks Commission.

“Critics of the process say [landmarking] can add weeks or even months to minor projects, along with thousands of dollars in expenses,” Crain’s New York reported.  And, absent clearance from Landmarks, substantial fines and penalties can issue for unauthorized work.

The owners of the Strand have indicated that they intend to fight this decision, as they believe they would lose pivotal property-related rights.  In the hopes of garnering public support, Strand has posted this statement on their webpage:

“We created this website as a public forum for all – Strand supporters, New York City residents, visitors, and small business owners – to voice grievances about Landmarks and the consequences of Landmarks’ thoughtless decisions.

We ask you all to leave a comment, publicly or anonymously, because collectively our voices will make real change to this bureaucratic and unjust system. When city agencies like Landmarks act unaccountably and recklessly, it us up to us, the people, to make our voices heard and demand accountability and corrective action.”

It should come as no surprise, given all the technological advances, that physical bookstores are becoming increasingly obsolete -- with the number of book sellers in the New York City area falling at an incredibly alarming rate. In 1950, there were 368.  That number has since fallen 79.5%, as only 79 remain (as of 2018).

“We are in a threatening retail and book environment, and are fighting to compete with Amazon... but unlike Amazon, we have never asked for taxpayer funded subsidies, tax breaks, or special favors. We do want the government to spare us changes in our business that already operates on thin perimeters,” as the website notes.

“Legal challenges to the constitutionality of non-owner landmarking applications have been unsuccessful in the past,” noted Debra Cohen, Co-Chair of Newman Ferrara’s Civil Rights Group. “These issues are typically examined on a case-by-case basis -- balancing individual property rights with a legitimate public interest in protecting buildings of architectural or historic significance.”