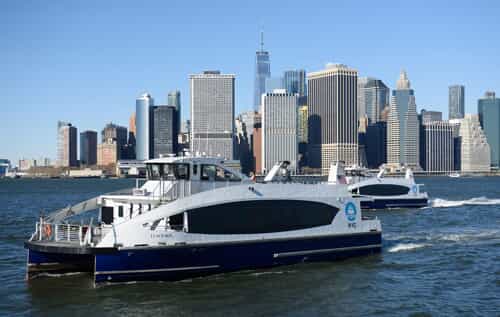 The New York City ferry system was created to give all New Yorkers an easy and affordable ride to Manhattan. And even though it’s priced the same as a subway or a bus swipe ($2.75), new data issued by the New York City Economic Development Corporation (EDC), suggests that affluent white demographic commuters comprise most of the riders who benefit from the ferry service each and every day.

“The numbers show the median income of riders is between $75,000 and $100,000 annually, with only 36 percent identifying as non-white or multiracial," the Gothamist reports.

By comparison, two-thirds of subway riders and three-quarters of bus riders are people of color, with median incomes between $29,000 and $40,000.

Opened in 2017, the Ferry now serves six different terminals throughout the city, including stops in Rockaway, Astoria, Lower East Side, Soundview, and the East River. Though each of these pickup points is in areas with diverse populations, the white, affluent demographic remains a relative constant.

Over a twelve-day span (May 28-June 10), the EDC distributed a survey seeking to ascertain:

With some 5,441 responses collected, the findings demonstrated that people use the ferry for same purpose as the subway system – with 74% of peak riders and 41% of all riders commuting to/from work (with 71% of the riders only working on weekdays, and a majority working from 9-5).

With taxpayers subsidizing each ferry trip by as much as $9.34 -- while it’s a $2.73 and $4.59 per ride subsidy for the City’s buses and subway -- many are of the view that maintenance of the City’s ground transportation services should be given higher priority.

City Council member Antonio Reynoso believes it is “irresponsible and unjust for the de Blasio administration to continue pouring resources into NYC Ferry when the system clearly doesn’t reach the individuals or communities that are most underserved by mass transit.”

City Council Speaker Corey Johnson added that there are “real questions about the high levels of subsidy, especially since most New Yorkers ride subways and buses and those New Yorkers tend to have lower incomes,” he said in a statement reported by Curbed New York.

EDC leadership believes the ferry service will continue to grow and expand. “NYC Ferry is proud of our success to date,” said an EDC spokesperson. “Since its launch in May of 2017, the system has become massively popular and has enjoyed sky-high ridership. We look forward to expanding this service in the coming months to neighborhoods that have endured unacceptably long commutes to the City’s job centers.”

Barring political action to end this costly subsidy, ferry stations are expected to open in Coney Island, Ferry Point Park, and St. George in the years to come.