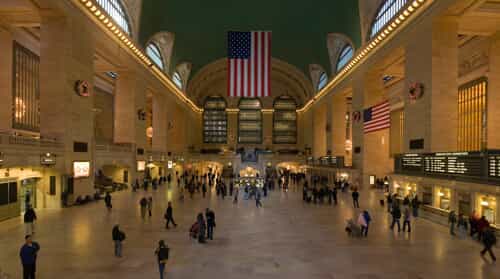 As the City prepares for the future, the MTA will soon begin a twenty-year construction process that will repair the underground entranceway to Grand Central Terminal.

According to the Wall Street Journal, on weekdays, roughly 200,000 riders from Westchester and Connecticut commute into the station.  But the plan supposedly won't affect those riders, as the restorative work will take place via the sidewalks and streets.  So, pedestrians are the ones that will be adversely impacted.

“To restore the facility, the MTA must excavate streets and sidewalks along a canyon of buildings housing some of the city’s major financial firms,” the Wall Street Journal reports.  “It also must rip up the tiny oases of trees, shrubs and flowers, known as malls, that line the center of Park Avenue.”

In the past, the MTA implemented patchwork repairs to maintain the structure’s stability. However, it has now become necessary to embark on a full renovation. “Officials say [the entryway] has deteriorated to such a degree that a wholesale rehabilitant is needed,” the Journal reports.

The $2 billion project, which isn’t expected to be completed until 2040, is long overdue, but riddled with challenges.  Fred Cerullo, the President of the Grand Central Partnership, noted that the main issue “will be how MTA schedules and coordinates its work during two decades in which the area is likely to see significant redevelopment.”

To read the Wall Street Journal’s full report on the construction, click here (subscription may be required).