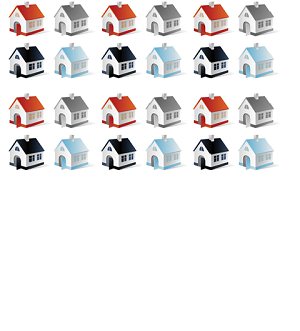 When the recession hit back in 2008, hundreds of thousands of families across the country lost their homes to foreclosure. Between 2007 and 2016, nearly 10 million homeowners were impacted according to CoreLogic, a housing research firm. However, while most saw a crumbling economy and soaring homeless rates, Wall Street, saw an opportunity.

From the suburbs of Connecticut to downtown Houston, millions of single-family homes sat empty, with no one to buy them. While the future looked bleak, in 2012, Freddie Mac and Fannie Mae launched a “REO-to-Rental” pilot program known as the Home Affordable Modification Program, which incentivized private-equity groups and hedge funds, like Blackstone Group and Colony Capital, to purchase foreclosed homes at modest prices from the government. The idea was simple enough, private investors would fix them up, rent them out, and rekindle a depressed housing market by bringing in new tenants – and it worked.

According to a piece in The Atlantic, Wall Street “spent a combined $26 billion on more than 200,000 homes in ailing markets” like Miami, Orlando, Detroit, and Atlanta between 2011 and 2017. That influx of cash meant that communities hard hit, could once again get back on their feet. While private investors undoubtedly helped jump-start the housing market, some question whether there was a down-side to all that institutional investment.

During the honeymoon stage, things were going great. Hedge funds “revolutionized” or, as Diane Tomb, the executive director of the National Rental Home Council, put it, “professionalized” landlord-tenant relations. Compared to many smaller landlords, the institutions were able to provide renters with efficient communication, timely maintenance requests, and a reliable management structure.

Yet, there were some quirks. For instance, one study published in 2016 by the Atlanta Federal Reserve found that corporate landlords in Atlanta were 8 percent more likely to file eviction notices and take renters to court than the much smaller moms-and-pops.

“My hope was that these private equity firms would provide a new kind of rental housing for people who couldn’t -- or didn’t want to -- buy during the housing recovery,” Elora Raymon, the report’s lead author, told Bloomberg. “Instead, it seems like they’re contributing to housing instability in Atlanta, and possibly other places.”

The report also found that some of the largest rental companies file eviction cases on more than a third of their properties, annually. While Atlanta is among the nation’s worst when it comes to evictions, this phenomena is by no means unique, as some speculate that, due to their mammoth size, many of these companies are able to evict tenants much easier and faster than small-time owners, and can more readily absorb the associated costs.

Further, news reports also indicate that the need for institutional landlords to rake in a profit for their investors has resulted in exorbitant rental hikes in some parts of the country, making it harder for some families to afford, or keep up with, monthly rent payments.

While New York agencies like the Rent Guideline Boards oversee rent increases on multi-family units subject to rent-regulation, single family units don’t share many of the same protections. Therefore, rent increases are often at the owner’s sole discretion. To put it in perspective, Wall Street’s single family rental companies charge nearly double the nation’s average. At its worst, rental increases in California for renewals averaged 8 percent in 2017, and 13% for new tenants according to a co-authored report by Alliance of California’s for Community Empowerment and Americans for Financial Reform.

Aside from higher rents and eviction spikes, some claim that institutional investors like Starwood Waypoint are shifting the burden of maintenance and repairs on the tenants. By making tenants pay for routine fumigation or broken stoves and refrigerators, Starwood Waypoint lowers its overall maintenance costs. Other companies like Colony Starwood have installed video software in rental properties in order to show tenants how to fix minor problems, so that ownership doesn’t have to intervene.

Ultimately, while many tenants may not be too keen on their Wall Street landlords, it looks like they are here to stay. According to the National Real Estate Investor, private investors are continuing to increase their foothold in the single family rental industry. Currently institutional investors operate 2 percent of the market or about 250,000 homes out of 16 million homes rental homes, nationwide.

By 2020, their market share is estimated to grow up to 5 to 6 percent. Thus, what started as a quick fix to a serious temporary housing problem may have sparked a real-estate industry where rental ownership will reign supreme.