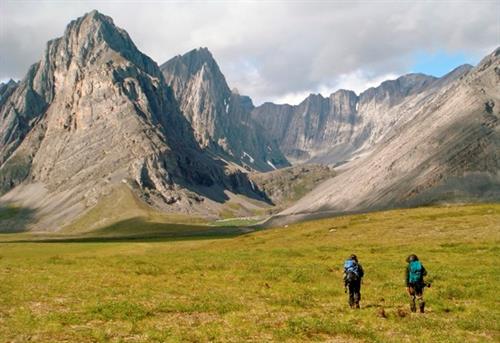 A new study by Dartmouth University found that a mountain range in Alaska was likely formed from bands of land from Greenland and from a stretch of the Canadian Arctic, contradicting earlier scientific models.

Stretching nearly 700 miles across, “Brooks Range” extends across northern Alaska into Canada's Yukon Territory, and is situated in an area known for its abundance of oil, gas and minerals.

Many had thought that parts of the range were formed by seismic activity, which caused Alaska to rotate away from a cluster of islands in the Canadian Artic over 125 million years ago.

According to the university’s press release, “under this original ‘rotation’ scenario, parts of the Brooks Range should match perfectly with Canada's Banks Island and Victoria Island about 450 hundred miles away,” but alas, they do not.

After deploying dozens of geologist to explore the region’s exposed rocks, the study found that many of the rocks had origins some 1,200 miles to the east.

“The geology of the northeastern Brooks Range does not match anything that we've studied in the neighboring region of North America," said Justin Strauss, an assistant professor of earth science at Dartmouth and the research lead of the study. "This complicates previous models for how you open this major ocean basin."

The evidence now suggests that the mountainous area was formed by a combination of activities, including, the action of a major fault system - similar to the San Andreas Fault of California - that transported part of what is now the Brooks Range from Greenland to the western Canadian Arctic Islands.

Bill McClelland, professor of earth and environmental studies at the University of Iowa and co-investigator of the study noted that: "The results of these studies have significantly enhanced our understanding of the tectonic processes that formed the Arctic margin of North America and will be instrumental in pushing forward on new research frontiers."

"If countries are going to make legal claims based on geology or geophysics, they should consider these much older boundaries that we are highlighting. Governments will to need to confront the complexities of geology meeting politics,” he said.

In the meantime, the research team will continue to explore the region and look for major fault systems.