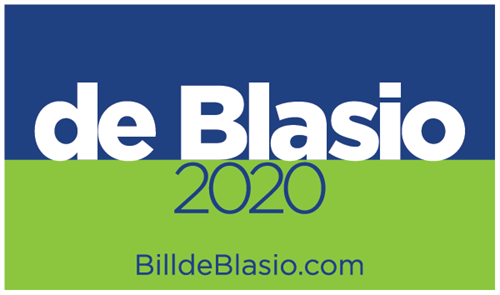 The progressive two-term mayor announced his run in a campaign video, pledging that he would “put working people first.” Since 2014, de Blasio’s tenure has been marked by social initiatives to support lower-income New Yorkers by providing more affordable housing and expanding free prekindergarten options across the five boroughs.

While some have praised de Blasio’s bid, others, such as President Trump, called de Blasio, “the worst mayor in the US” and derisively stated that “NYC HATES HIM!”

According to a Quinnipiac University poll released April 3, 2019, only 34 percent of New Yorkers have a favorable opinion of the mayor, while 47 to 32 percent of voters think that de Blasio should not run for president.

The same poll also found that he was more popular among black and Hispanic residents than whites, with 66 percent of black voters approving of his time in office, compared with 40 percent of Hispanics and 31 percent of whites.

Due to the large pool of Democratic nominees, some question whether de Blasio will even qualify for the first Democratic presidential debates on June 26 and 27, even up to 20 candidates.

In order to pass muster, de Blasio would need to earn 1 percent in three public polls, or garner support from 65,000 donors, from at least 20 states, by June 13.

As it currently stands, Joe Biden, former Vice President under Barack Obama, is leading in national polls, with Beto O’Rourke and Bernie Sanders being distant runners-up.

The Mayor’s first campaign event is scheduled for Friday in Iowa, a historical swing state and one that will be vital in the 2020 election.

A copy of an email de Blasio circulated to supporters, earlier today, appears below:

Working people in this country deserve better — and I know we can do it because we’ve already done it in New York City.

As mayor of the largest city in America — larger than 39 entire states — I watched my neighbors wait a long time for Washington to fix the issues our nation is facing. When Washington wouldn’t act, we decided to go ahead anyway. Now we have a $15 minimum wage, paid sick leave and guaranteed health care — including mental health services.

Everyone loved the idea of Universal Pre-K, but naysayers said we couldn’t afford it. We made it a priority and, within two years, ensured every four-year-old in our city receives the same start to their education, saving working parents tens of thousands of dollars in childcare expenses.

Today I am proud to announce my candidacy for president of the United States of America, because it’s time to finally put working people first.

Join me in this campaign for president today and donate $1 now to show that you’re with us. We’ve won big, meaningful progressive victories in New York City by pushing past everyone who said we can’t — and we’re going to do it for the whole country, too.

Every goal we have is about fighting income inequality and helping working people secure an economic future they can believe in. Why?

Because once you’ve seen what’s happening in our country right now — what a bully and con artist like Donald Trump is doing to it — you can’t unsee it. This country has spent decades taking from working people and concentrating wealth in the hands of the 1 percent. We’ve been confronting him since day one and we can’t stop now.

The problems our nation is facing are urgent. That’s why we’re not sitting around making plans for how to solve things; we’re solving them now. We’re not watering down our goals to try to win over the people who made this mess possible; we’re setting and achieving bold, progressive goals now. We’re moving forward — and when we move forward together, we win.

Join my campaign for president today to fight for working people. Donate $1 now.

Whenever someone tells me we can’t prioritize solutions that will help working people live better, safer, happier and more prosperous lives, this is what I tell them: There's plenty of money in the world. It's just in the wrong hands.

Thank you for lending me a hand,