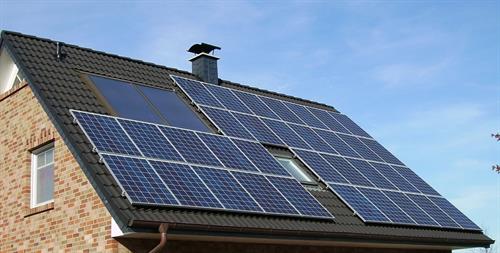 The sun is one of the most powerful renewable energy sources in our universe, yet not enough Americans are honing in on some of the incredible benefits solar power has to offer.

And one of the most popular ways of harnessing that energy is in the form of photovoltaic, or solar panel, technology.

Prior to 2010, rooftop solar panels were mainly used by higher-income households, but due to declining costs and tax credits, solar is now becoming more accessible to everyone.

According to Renewable Nation, a nonprofit which aims to help homeowners make energy efficient choices, about four out of five (79 percent) U.S. homes are suitable for solar. Yet, only 1.3 million rooftop solar installations have been completed, which is just 2.2 percent of the total potential.

A 2018 report released by the National Renewable Energy Laboratory, advises that solar energy could cover 75% or more of residential energy consumption (depending on where you live in the U.S.). Other benefits include large tax credits and rebates, and the fact that the environment will be better off; as solar panels will reduce greenhouse gas emissions and dependence on fossil fuel.

Even though the long-term benefits of solar energy are difficult to negate, there are clear hurdles moving more people toward that clean energy. The most obvious one is the upfront installation costs. In 2019, the average cost was nearly $3.05 per watt, according to EnergySage, which means that the average solar panel system will run you around $12,810, after tax credits are applied.

However, as the technology becomes more advanced, and cheaper, the cost factor eventually won’t matter as much.

Another hurdle is the fact that nearly 35% of Americans are renters, and therefore, they don’t have much of an incentive to use or install pricy solar panels. And the roofs of many American homes aren’t in a condition to hold the weight of the equipment.

Lastly, while many may want to make the switch, they just don’t know where to start. In fact, some surveys indicate that some 62% of homeowners (more than three out of five) would like to go solar.

In order to bridge that gap, Renewable Nation is one of several mobile applications promoting homeowners to pursue affordable and clean energy alternatives by providing tips and other useful information.

According to Scott Stapfis, Program Director at Renewable Nation, his company’s app is “going to cut through the clutter and confusion about cost, reliability and accessibility that is holding back far too many American homeowners and schools from going solar. When three out of five homeowners want solar on their roof and fewer than one in 30 have done so, you know there is some real hesitancy that has to be addressed.”