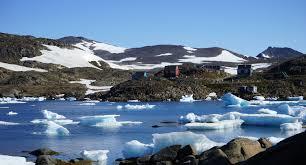 On Thursday, the Wall Street Journal was among the first media outlets to report of the President’s interest in buying Greenland, for strategic reasons. President Trump confirmed the rumors, and acknowledged that the bid would be “essentially a real-estate deal.”

When Greenland got wind of the news, the semi-autonomous Danish territory met Trump’s interest with hilarity.

Both countries have vehemently professed that Greenland is not for sale.

According to White House advisers, Trump is interested in the island-nation for its natural resources, such as iron, uranium, and oil, and is also focused in geopolitical relevance.

To be clear, this isn’t the U.S.’s first ballgame with Greenland. As far back as 1867, the U.S. had its eyes on the world’s largest island.

When The Treaty of the Danish West Indies was ratified in 1916, giving the U.S. sovereignty over the Virgin Islands, then Secretary of State William H. Seward, proposed the purchase of both Greenland and Iceland to Congress, but the suggestion was rebuffed.

The “Greenland question”arose again in 1946, under President Harry Truman, as a way for the U.S. to gain more control in Europe, following World War II.

However, that offer to the Danish Foreign Minister Gustav Rasmussen, again fell flat.

On Twitter, Greenlanders have expressed horror at the prospect of being acquired:

Greenland to Trump: We're not for sale. pic.twitter.com/xj3PSwQ8MH

#Greenland is rich in valuable resources such as minerals, the purest water and ice, fish stocks, seafood, renewable energy and is a new frontier for adventure tourism. We're open for business, not for sale❄️🗻🐳🦐🇬🇱 learn more about Greenland on: https://t.co/WulOi3beIC