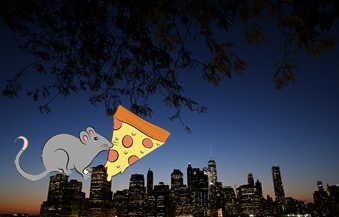 New York has a rat problem, and a rather big one, at that.

For many, New York and rats are synonymous, as locals have always been forced to coexist with those foul four-legged creatures.

However, over the last century, as New York’s population has mushroomed, so has its rats. And the infestation has expanded exponentially in recent years, spreading to just about every bodega, Brooklyn eatery, and taxi parked on Park Avenue.

Even though New York is ranked behind Chicago and Los Angeles for the country’s top “rattiest cities,” some studies put our area’s rat population at around 2 to 3 million. (Yikes!)

It’s so bad, that Mayor Bill de Blasio even launched a concerted effort to eliminate NYC’s vermin, spending upwards of $32 million to combat the infestation in the Bronx, Manhattan, and Brooklyn. The plan, which was launched back in 2017, aims to fine buildings for waste violations, put more trash compactors on the streets, and replace dirt floors in public housing with concrete ones.

While rats have a made a home in all five boroughs, they seem to love the Bronx and Brooklyn the most, according to data from the New York City Department of Health and Mental Hygiene.

The city has launched a rat portal that pinpoints which neighborhoods have had initial and follow-up rat inspections, and the results of those inspections. (These health inspectors look for active rat signs, which include sightings, droppings, and buildings reports.)

If you want to keep the rats away, we got these tips from the NYC Department of Health:

And, if you love rats as much as we do, check out Vice’s coverage of a “vigilante group,” known as “The Ryders Alley Trencher-Fed Society” (a.k.a R.A.T.S), a bunch of New Yorkers who hunt down rats for “fun."