New Comptroller Stringer Report: NYC’s Economy More Diversified Since 2000, But May Not Be Less Susceptible to Future Economic Downturns 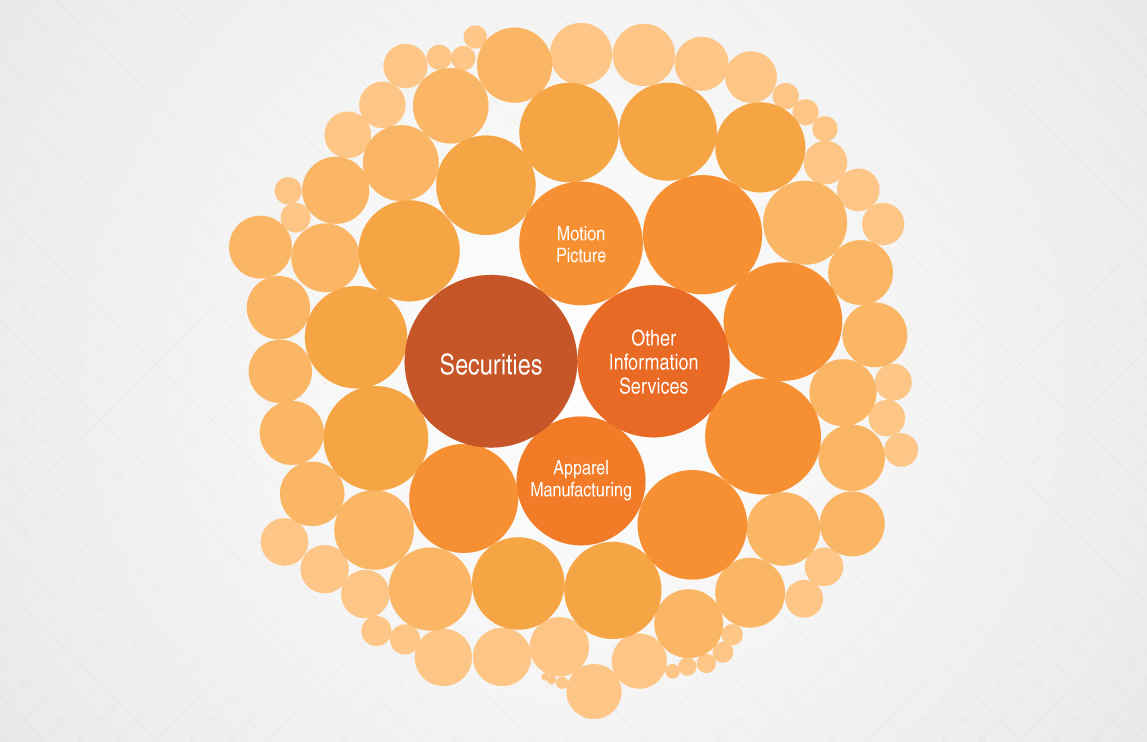 As New York City approaches the 10-year anniversary of the 2008 financial crisis, Comptroller Scott M. Stringer recently released a first-of-its-kind report that looks at the diversification of the city’s economy. The report, “New York City’s Economy Has Become More Diverse: So What?” highlights that, although the City economy is more diversified than it was in 2000, it is not necessarily better positioned to weather future downturns or deliver long-term, robust economic benefits to working- and middle-class New Yorkers.

The new report examines the old adage that “when Wall Street sneezes, the City catches a cold” — and it examines the theory that a more diversified economy is less vulnerable to both industry-specific shocks, such as a financial market crash or a broader economic downturn. The report finds that New York City’s diversification since 2000 will likely yield stronger job growth in the future. At the same time, however, the analysis concludes that job growth will not necessarily be more stable, because many of the new jobs are just as vulnerable to an economic downturn as the jobs they replaced. The report also notes that middle class job growth has lagged behind lower wage sectors, where many of the new jobs are being created.

“We need to build a robust, thriving middle-class. Wall Street is still a big part of our economy, but we must keep nurturing burgeoning sectors that allow working New Yorkers to move up the economic ladder with good-paying jobs. From tech to healthcare, from education to the arts, industries that support working New Yorkers matter. We have to keep diversifying so that we aren’t too reliant either on Wall Street or jobs that would be susceptible to being lost in the event of a downturn. But we have to embrace a thoughtful approach,” said New York City Comptroller Scott M. Stringer. “While we’ve made extraordinary job gains since the Great Recession, we’re facing new challenges. This analysis shows that diversification by itself is not a panacea. The industries that are growing today are just as vulnerable as Wall Street. Our affordability crisis is mounting, wage growth is stagnant, and underemployment remains a concern. That’s why we need to take smart, strategic steps to build the resilient economy of the future, with higher wages, better working standards, and strong jobs for everyone.”

The City Is Less Diversified than Many Other Major Metropolitan Areas 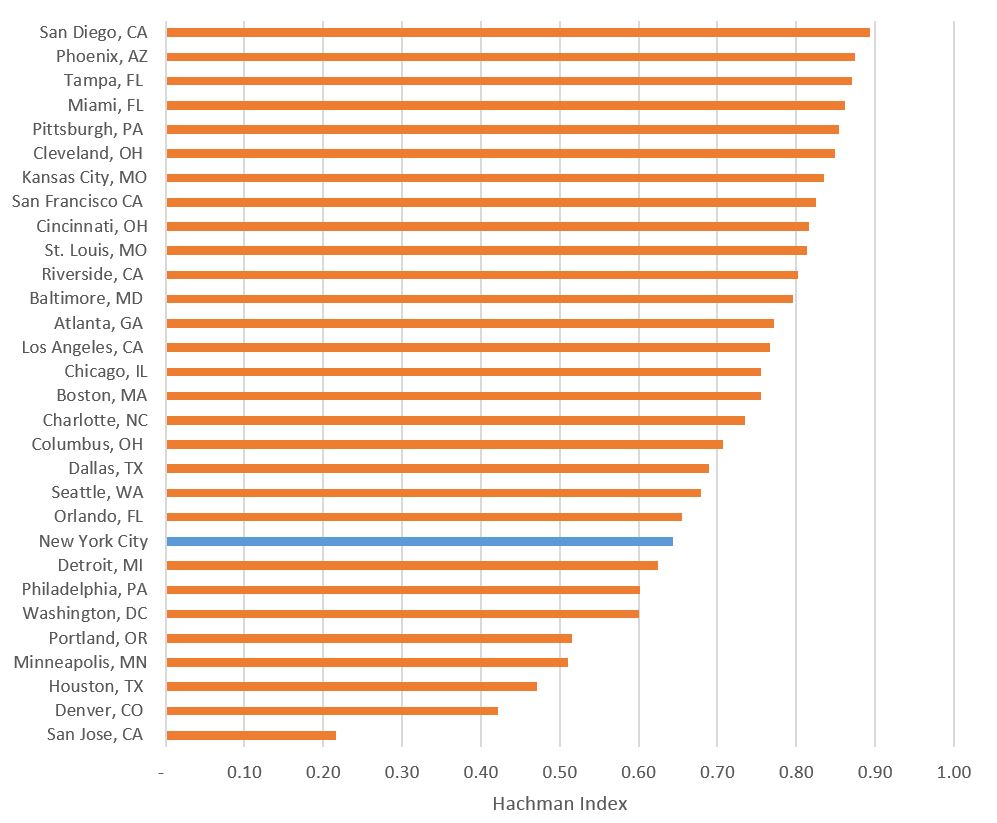 Diversification of the City Economy by Sector 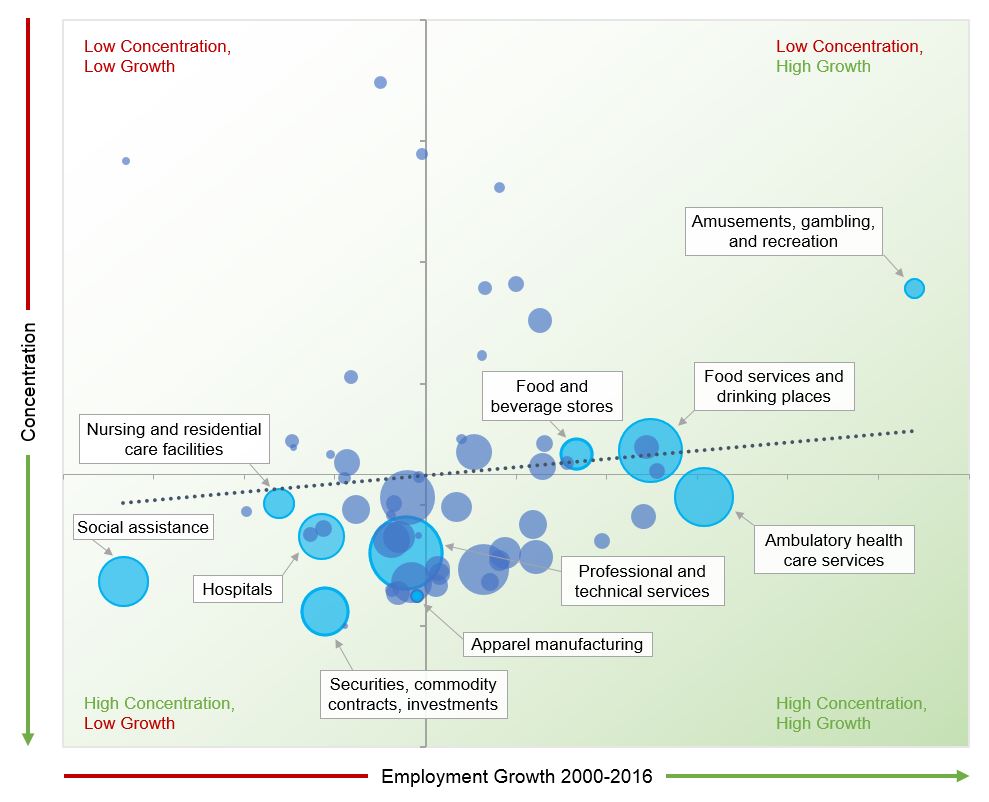 Studies of major metro area economies have shown a connection between greater economic diversity and smaller employment and wage fluctuations during an economic downturn. This report examined if New York City’s increased economic diversity would lead to less vulnerability.

Diversification is Projected to Lead to Higher Job Growth

A More Diverse Economy Has Not Brought Higher Wages

Low-Pay Jobs Have Grown Most Rapidly

The Export Sector Has Declined, While Local Industries Boomed

The report concludes that as diversification has increased, the City’s economy has not necessarily become less volatile and wages for working- and middle-income New Yorkers have not grown significantly — despite continually rising job growth. It also highlights a number of policy focuses for the City in response to both the positive and negative aspects of our more diversified economy. They include: