WASHINGTON, D.C. -- Americans worry far more about becoming the victims of cybercrime than the victims of conventional crimes, with two-thirds of U.S. adults worrying at least occasionally about computer hackers stealing their personal information (67%) and having their identity stolen (66%).

How often do you, yourself, worry about the following things?


Since 2009, Americans' anxiety about identity theft has consistently topped their fears about other crimes by at least 19 percentage points. This year's gap between fear of cybercrime and the next-greatest level of crime worry, having a car broken into, is a wide 28 percentage points.
These data come from Gallup's annual Crime poll, conducted Oct. 5-11. In recent years, there has been a steady stream of reports about large-scale data breaches, including at Equifax in 2017, Anthem in 2015, Home Depot in 2014, Yahoo in 2013 and 2014, and Target in 2013. Americans' consistently high anxiety about cybercrime may be attributable partly to these media reports about high-profile incidents.
Gallup has asked Americans about their fears of being the victims of various crimes since 2000. However, cybercrimes are relatively new additions to the list. U.S. adults have been asked intermittently about worry about identity theft since 2009. The item about hackers stealing personal information was added to the survey this year, though prior surveys included questions on narrower cybercrime-related issues.
While Gallup's trend on Americans' worries about cybercrime is limited, it has been relatively consistent. The percentage of Americans who worry frequently or occasionally about being a victim of identity theft has hovered between 66% and 70% since 2009. 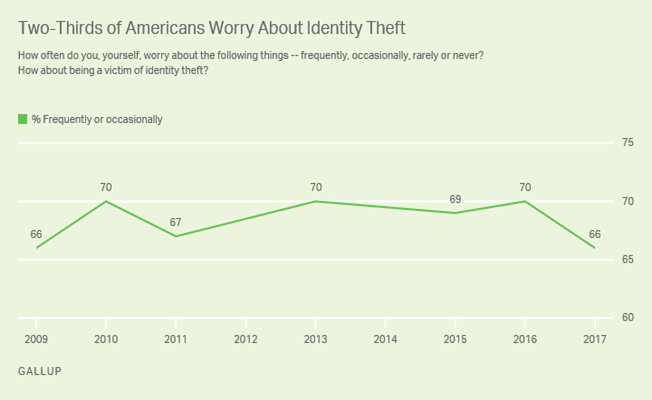 Americans' Cybercrime Worry Likely Related to Higher Victimization
Worry about cybercrime among U.S. adults may stem from its being more common, although substantial media coverage may contribute as well. Americans are more likely to report being the victim of cybercrimes than any of seven other crimes Gallup measures.
One in four (25%) Americans report that they or a member of their household has had personal information stolen by hackers in the last 12 months. Sixteen percent of U.S. adults report that they or a member of their household has been a victim of identity theft during that same time period. Having money or property stolen was the most common conventional crime to affect U.S. adults, with 12% saying they had been a victim of this activity in the last 12 months.

Please tell me which, if any, of these incidents have happened to you or your household within the last twelve months?

There is relatively little difference in the likelihood of being a victim of cybercrime among most subgroups of Americans. However, middle-aged Americans are the most likely to experience both identity theft and loss of personal information to hackers, while seniors and adults younger than 30 are less likely.

Bottom Line
Of all criminal activity they experience, Americans are most concerned about cybercrime, and probably rightly so, given the high levels of reported rates of victimization. This worry is confirmed by other reports about cybercrime in the U.S. The FBI's Internet Crime Complaint Center reported an average of 280,000 complaints a year from 2000-2016. Additionally, major data breaches over the past several years have affected hundreds of millions of people in the U.S. and around the world, contributing to the overall anxiety concerning cybercrime.
While law enforcement agencies have made considerable efforts to tackle cybercrime, additional resources devoted to the issue and high-profile arrests of cybercriminals are likely necessary to calm the public's fears.