Attorney General Eric T. Schneiderman recently announced that over 4,700 donation collection bins throughout New York now disclose whether clothing or other items deposited in those bins are used for charitable or for-profit purposes. This follows the Attorney General’s enforcement effort to ensure bin owners’ compliance with a new state law that imposes strict regulations on the placement, maintenance, and transparency of collection bins across the state.

“New Yorkers who drop-off personal items into collection bins deserve to know whether they are making a charitable donation or enriching a for-profit corporation,” said Attorney General Schneiderman. “We are committed to ensuring that New Yorkers wilknow how their donations will be used

General Business Law § 399-bbb, which took effect in June 2016, was enacted to address the proliferation of collection bins across the state, and the lack of transparency regarding how collected items are used. The law sets forth specific requirements for signage that must be placed on all collection bins – such as a clearly labeled statement of purpose that explains whether donations will be used for profit or charitable purposes. Additionally, collection bins must be labeled with the name, physical address, phone number, and website of the owner of the bin, as well as contact information for the Attorney General’s office. The law prohibits the placement of bins on public property and regulates the maintenance of the bins, including a requirement that they are regularly emptied.

The new state law follows a 2015 settlement reached by the Attorney General’s office with Thrift Land USA of Yonkers, Inc. (“Thrift Land”), a for-profit company that operated 1,100 collection bins throughout the New York metropolitan area. The settlement followed allegations that Thrift Land used a charitable veneer to trick and mislead the public into believing that the clothing and personal property they donated would benefit the charity whose name and logo appeared on its bins. However, Thrift Land sold the clothing and other items at a huge profit, while the charities named on the bins received only a small fee for the use of their name and logo. As part of the settlement, Thrift Land agreed to rebrand its bins so they did not state or imply that items deposited in the bins will benefit any charity or serve any charitable purpose. Thrift Land also made a payment of $650,000 to two not-for-profit organizations and paid $50,000 in penalties and costs to the state.

To ensure that owners of collection bins are in compliance with the new law, investigators from the Attorney General’s office inspected bins across the state and determined whether they met the statutory requirements. Notices of violations were then issued to bin operators, recycling companies, and charities that detailed the steps each owner must take in order to bring their respective bins into compliance with the law.

To date, a total of 4,762 collection bins throughout New York have been brought into compliance. The compliance effort is ongoing; Attorney General Schneiderman will continue to take appropriate enforcement action against bin owners and operators that fail to take the necessary steps to come into compliance.

Bringing a bin into compliance requires any person, business, not-for-profit organization, or other entity who owns or operates publicly accessible collection bins to affix a readily visible label on the front of the bin that includes the following:

The Attorney General encourages New Yorkers to report out-of-compliance bins to his office at 800-771-7755 or submit a complaint online.

Below is a list of 20 bin owners with collection bins located throughout the state that are now in compliance. 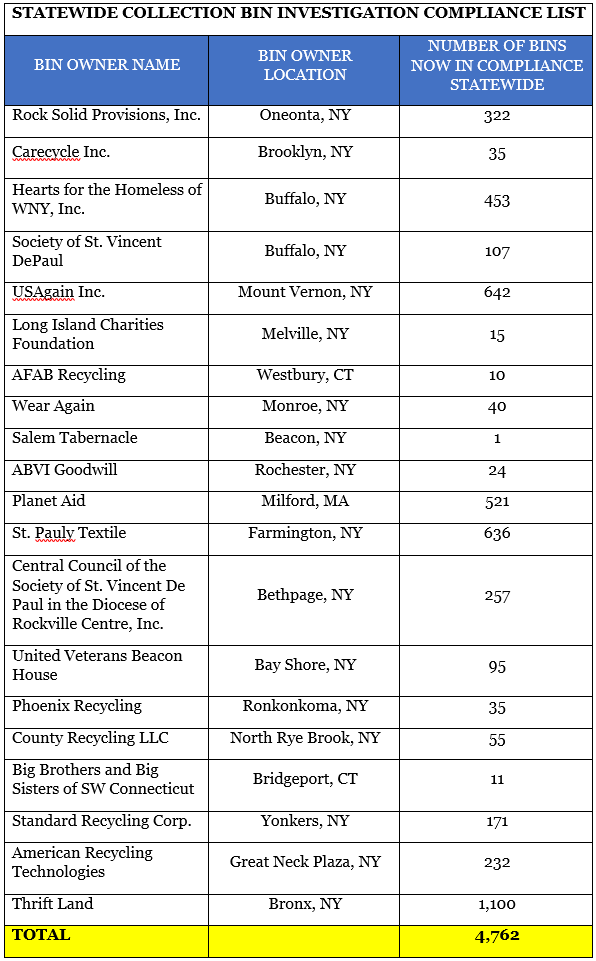