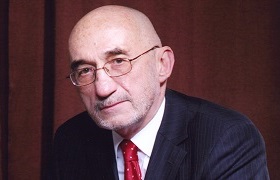 The Brooklyn Law School community mourns the loss of Professor Emeritus Richard T. Farrell ’64, a popular member of the faculty for more than 50 years. Farrell died at the age of 80 on February 7.

Born in Brooklyn in 1937, Farrell joined the faculty upon graduation from the Law School in 1964. He was a fixture at the Law School teaching Evidence and New York Civil Practice for a half-century until his retirement in 2014. He served as clerk to Court of Appeals Judge John F. Scileppi from 1965 to 1967 during a short leave from the Law School.

Farrell was a leading authority on the New York Civil Practice Law and Rules and was the author of Prince, Richardson on Evidence, (11th ed. and 12th ed.) and annual supplements, the preeminent text on the New York Law of Evidence. This treatise is in virtually every courtroom in New York State, and it continues to be one of the most-cited texts in the New York courts.

Farrell argued more than three dozen cases before the New York State Court of Appeals and numerous appeals before the U.S. Supreme Court. He represented the prevailing party at the U.S. Supreme Court in Morales v New York (1969), a Fourth Amendment case in which the Court overturned a decision by the New York Court of Appeals because a confession may have been the product of an illegal detention; and Grady v Corbin (1990), in which the Court ruled that the Fifth Amendment's double jeopardy clause did not permit prosecution for vehicular homicide after the defendant had pleaded guilty to driving while intoxicated.

Revered by generations of Brooklyn Law School students, Farrell was known for his “lifetime guarantee”— his frequently accepted invitation to all his students to consult him “anytime, anywhere” if they thought he could help them solve some legal problem. For his many contributions to legal education, the Law School honored him with the Wilbur A. Levin Award as Distinguished Service Professor of Law in 2005 and as an Icon of Brooklyn Law School in 2015.

“Dick Farrell was one of a kind, and during his 50 years on the faculty he became, in many ways, synonymous with Brooklyn Law School,” said Dean Nick Allard. “Stories about him from his legions of students, fellow members of the faculty, and vast army of friends and Damon Runyonesque characters in the community would fill many books on an entire library shelf. I know that everyone in our extended Brooklyn Law School community extends our deepest sympathy to his entire family.”

His influence extended beyond the law school’s halls, as a noted lecturer to lawyers and judges on matters of evidence and New York civil practice. For more than 40 years, he lectured in continuing legal education programs throughout the state for the New York bench and bar. From 1977 to 1992, Farrell served as the reporter for the New York Pattern Jury Instructions Committee. He was recognized for his longtime service to the legal community with awards including the 2007 President’s Award from the Catholic Lawyers Guild and the 2012 New York State Bar Association Criminal Justice Section Award for Outstanding Contribution in the Field of Criminal Law Education.

Farrell received his B.A. from St. John’s University and his L.L.B. from Brooklyn Law School. While a student at the Law School, he served as Editor in Chief of the Brooklyn Law Review.

He is survived by his wife, Carol, his sons Christopher, Thomas, Richard (Class of '92), and Sean.