It’s been more than six months since the Summer of Hell began for LIRR riders—but it feels like it never ended. Every new week brings delays, cancellations and troubling news about the state of our vital transportation system.

Enough. We deserve answers and action.

That’s why I traveled to Albany to question MTA Chairman Joe Lhota, and pressed him for hard commitments to railroad riders. 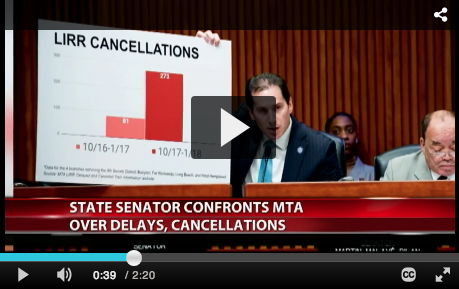 The NY Times reported perhaps the most important exchange:

State Senator Todd Kaminsky demanded that the Long Island Rail Road, plagued by a spate of cancellations, improve its performance. “You have my word,” Mr. Lhota responded, “it will get fixed.”

Newsday added: it wasn’t until Kaminsky took the mic that Lhota found himself having to answer significant questions about the railroad.

With your help, we have put the MTA on notice. But we will not rest until the LIRR is the modern, reliable transportation system that Long Islanders deserve.

I will continue to update you with our progress and new ways to get involved in this fight. Together we will get the LIRR back on track. It’s about time.