The offices of New York Attorney General Eric T. Schneiderman and New York City Mayor Bill de Blasio today delivered to the U.S. Environmental Protection Agency testimony and comments collected during New York’s “People’s Hearing” on EPA’s proposed repeal of the Clean Power Plan – the first-ever nationwide limits on emissions of climate change pollution from existing power plants. In the testimony, New Yorkers overwhelmingly supported the Clean Power Plan, focusing on the central role it plays in stemming climate change’s growing harm to the health, environment, jobs, and prosperity of New Yorkers. In fact, rather than doing away with the regulation, most testified in support of strengthening the Clean Power Plan.

“From increased flooding and extreme weather to air pollution, New Yorkers are on the front lines of climate change and know first-hand the vital importance of the Clean Power Plan,” said Attorney General Schneiderman. “The EPA tried to avoid hearing directly from New Yorkers on the Clean Power Plan – so we’re delivering our message to their doorstep: New Yorkers’ health and safety must come before corporate polluters. And if the Trump administration continues to move forward with this repeal, we’ll see them in court.”

“The EPA’s attempt to repeal the Clean Power Plan proves again that the Trump Administration will choose fossil fuel profits over our future every time. New York City will not,” said Mayor de Blasio. “When our national government falls down, the people have to step up, and show that we can solve this problem at the grassroots.”

“Our People’s Hearing on the Clean Power Plan in NYC gave New Yorkers who have been directly affected by climate change the opportunity to make their voices heard. Our city supports the Clean Power Plan and knows that repealing it would lead to more carbon emissions, more respiratory diseases, and more likelihood of climate disaster. The Clean Power Plan would ensure that our nation does not continue to rely on coal or dirty fuel oils for electricity. By ending the plan, the EPA has made it clear that the Trump Administration will put the fossil fuel industry first. Thank you to the community groups and members of the public who attended and testified at the hearing. I also thank Attorney General Schneiderman and Mayor de Blasio for their partnership on protecting New Yorkers from the effects of climate change,” said Council Member Costa Constantinides, Chair of the Council’s Environmental Protection Committee.

The People’s Hearing was organized by the Attorney General’s and Mayor’s offices after the Trump EPA ignored requests by Attorney General Eric Schneiderman and the New York City’s Law Department to hold public hearings in the state to ensure that New Yorkers’ voices were heard directly on the proposed repeal. Despite the direct climate impacts facing residents of New York and other states on the eastern seaboard, EPA refused to hold a public hearing on their proposal anywhere north or east of West Virginia.

New Yorkers are on the front lines of climate change, as tragically demonstrated by Hurricanes Sandy and Irene. The costs of Hurricane Sandy to New York alone will likely top $40 billion, including $32.8 billion to repair and restore damaged housing, parks, and infrastructure and to cover economic losses and other expenses. In 2014, Attorney General Schneiderman released a report entitled “Current and Future Trends in Extreme Rainfall Across New York State” that highlights dramatic increases in the frequency and intensity of extreme rain storms across New York.

The Clean Power Plan is based, in large part, on existing state laws that have successfully cut carbon pollution from power plants by even greater amounts and in even less time than called for by EPA under the rule. For example, under the Regional Greenhouse Gas Initiative (RGGI), New York and eight other states have shown that substantial carbon pollution cuts from existing fossil fuel power plants are achievable by encouraging shifts to less carbon-intensive generation, increasing use of renewable energy, and reducing demand through energy efficiency. RGGI has been a major climate success, and a new study shows that, in the last three years alone, it has helped grow participating states’ economies by $1.4 billion while adding 14,500 years of full-time employment in the region.

The People’s Hearing was held in partnership with New York City Councilmember Costa Constantinides and The New School, and co-sponsored by 32 New York organizations. 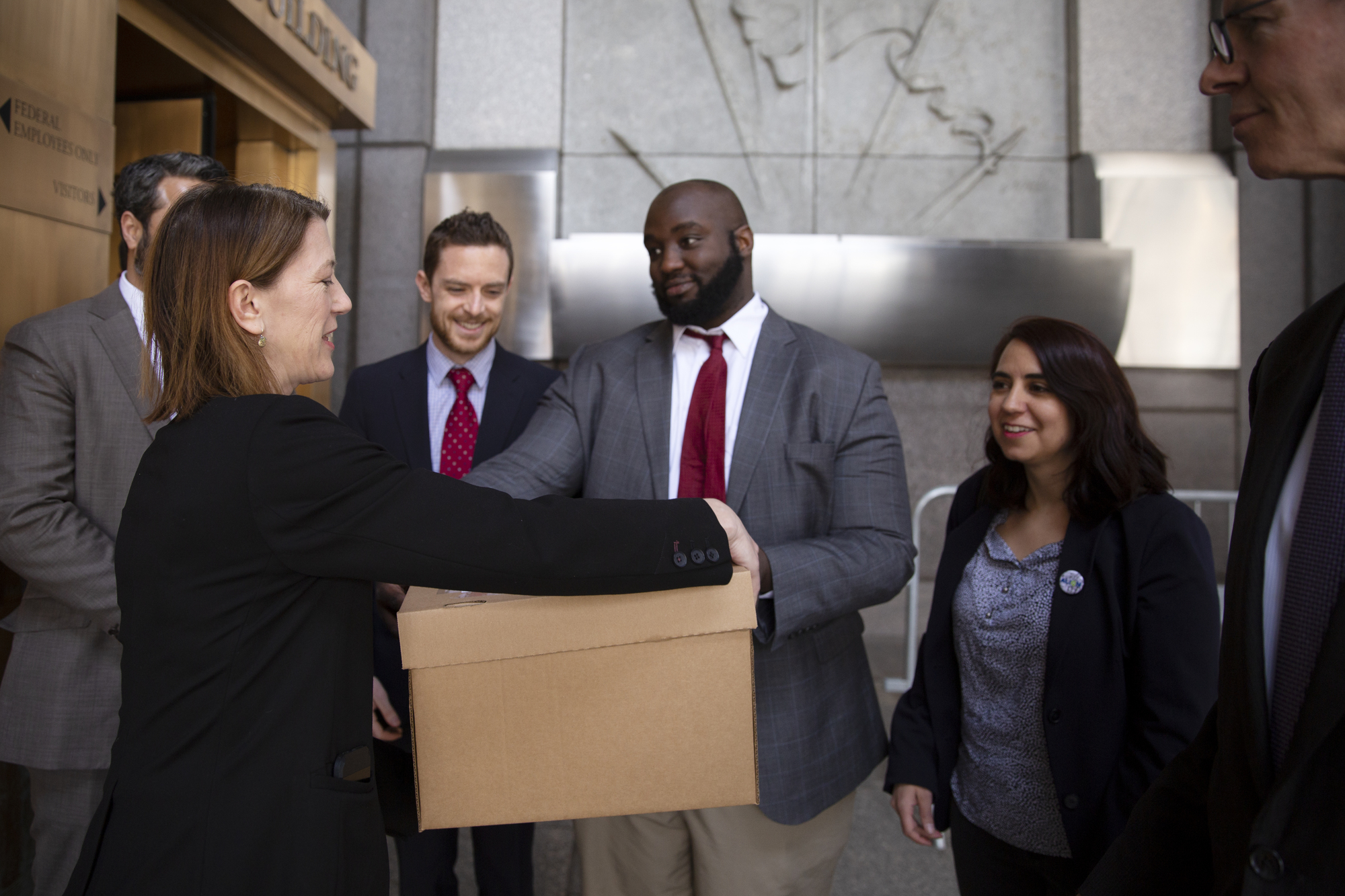 Eddie Bautista, Executive Director, New York City Environmental Justice Alliance, said, “Climate change heightens the vulnerability of disadvantaged communities, which bear the brunt of its environmental and socioeconomic burdens. On behalf of these communities, we need to fight climate change through a comprehensive approach – one that focuses on emissions reductions, resiliency and adaptation measures, and supporting workers and communities in the transition to 100 percent renewable energy. NYC-EJA supports the Clean Power Plan because it is critical to this fight. We thank the Attorney General and the Mayor’s office for holding the Peoples Hearing and helping the voices of New Yorkers be heard in support of the Clean Power Plan.”

Adrienne Esposito, Executive Director of Citizens Campaign for the Environment, said, “The Clean Power Plan is an historic opportunity to reduce carbon pollution and fight climate change. Efforts to block sound science from guiding policies to protect the public interests are detrimental to our nation’s sustainability and financial security. We are abundantly grateful to Attorney General Schneiderman and the Mayor’s Office for their conviction and commitment to fighting climate change, and for giving New Yorkers an opportunity to voice their opposition to EPA’s repeal of the Clean Power Plan.”

Donna De Costanzo, Eastern Region Director for Climate & Clean Energy at the Natural Resources Defense Council, said, “The Trump administration can’t hide from the truth. The message New Yorkers are sending is loud, clear and compelling. They know, because they’ve seen it firsthand, that climate change poses a dire and growing danger to our health, our economy and our future. And they, like the vast majority of Americans, want decisive action now to curb that threat. That starts with strengthening, not abandoning, the Clean Power Plan’s limits on dangerous carbon pollution from dirty power plants.”

Marcia Bystryn, President of the New York League of Conservation Voters said, “New York is taking the lead on reducing emissions and improving air quality, with or without help from Washington, but repealing the Clean Power Plan would expose New Yorkers to unconscionable risks. We are proud to stand with Attorney General Schneiderman and the Mayor’s office as they deliver these comments to the EPA.”

Conor Bambrick, Air and Energy Director for Environmental Advocates of New York said, “Today, while climate pollution continues to sicken people, harm the economy, and wreak havoc on our infrastructure, EPA’s solution has been to repeal any progress we have made addressing this issue. Simply put, the Clean Power Plan is a critically important public health regulation that will save lives—it should be strengthened, not eliminated.”

Riverkeeper's Legal Program Director Richard Webster said: “To address climate change, we must cut emissions and reduce our reliance on fossil fuels. Unless we do, New Yorkers will face ever more extreme weather events and rising sea levels. However, the EPA is now proposing to scrap the Clean Power Plan, essential limits on power plant emissions of the gases that cause climate change. Adding insult to injury, the EPA refused to even schedule public hearings on their proposal that were accessible to New Yorkers. Today, we’re showing the Trump Administration that New Yorkers voices will not be silenced, and that we need the Clean Power Plan and clean energy to protect our lives and livelihoods.”

“The EPA’s decision to reverse the provisions of Clean Power Plan without any replacement, is another example of the Trump administration’s willingness to sacrifice the safety, health and well-being of our people for the short-term, narrow interests of polluters. In New York State we must lead the way by moving to 100% renewable energy to combat the threat of climate change, while ensuring that workers and their families are at the forefront of the transition to a green energy economy. It is clear that we cannot depend on the federal government for the foreseeable future,” said Maritza Silva-Farrell, Executive Director of ALIGN.