Taylor Garbage Service, Inc. and Its Principal Will Pay $550,000 in Civil Penalties

“Bert Adams Disposal and Taylor Garbage Service illegally and secretly divided up their territory so they could rig the market and rip-off their customers by charging inflated prices,” said Attorney General Schneiderman. “I am pleased we were able to bring these perpetrators to justice.My office is committed to protecting New York consumers from anticompetitive and illegal business tactics wherever they occur.”

Taylor Garbage Service and Bert Adams Disposal dominate waste-hauling and recycling services in the Broome County area. The Attorney General’s investigation revealed that, from as early as July 2014 until May 2016, the two companies entered into collusive agreements to rig bids for waste-hauling, recycling, and related services, and forced customers to pay excessive prices for basic services. The companies conspired through in-person meetings, phone calls, and text messages.

According to paperwork filed in court, over this two-year period, the companies exchanged hundreds of text messages and calls – including the following exchange in which the companies set their cartel in motion: 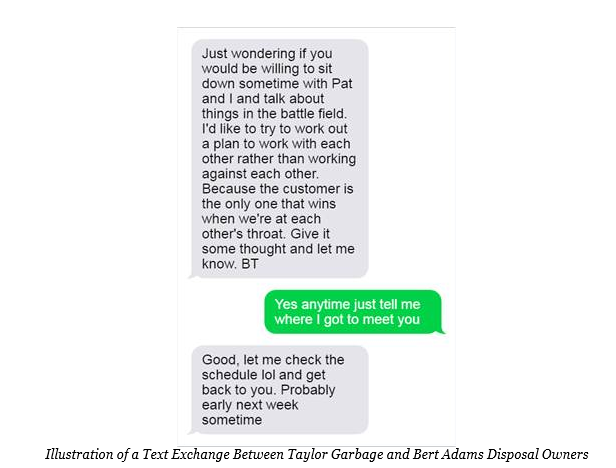 In another text message exchange, the co-conspirators discussed coordinating price increases to consumers, rather than setting prices independently as the law requires: 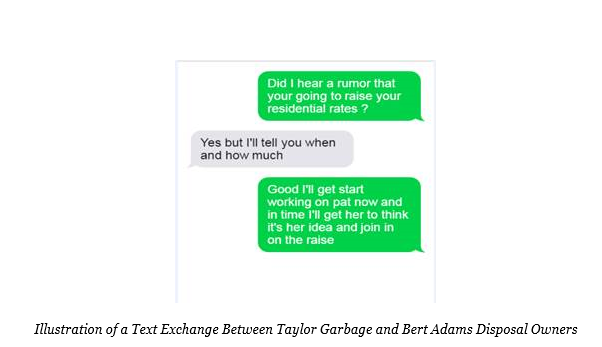 Additional texts showed that the companies agreed on when to refrain from giving a quote to a prospective customer, thus thwarting the customer’s attempt to switch providers in response to exorbitant prices.

As illustrated in the following example, as part of their illegal cartel, each company regularly submitted inflated bids and price quotes (also known as cover bidding) to ensure that the other firm would keep its current customers without raising suspicion by being the only bidder: 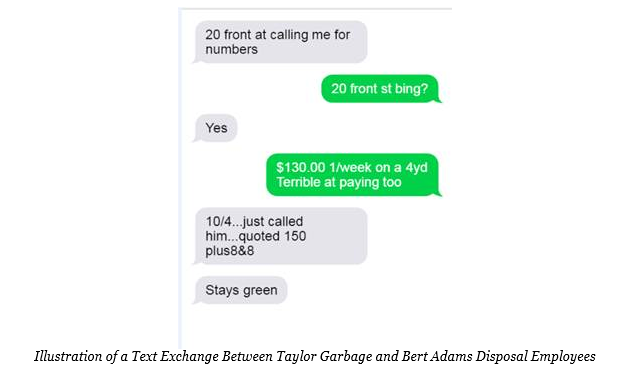 Today, Elbert Adams, majority owner of Bert Adams Disposal, entered a guilty plea before the Honorable Joseph F. Cawley in Broome County Court, to the “E” felony charge of Combination in Restraint of Trade and Competition – also known as a violation of New York’s Donnelly Act.

Adams admitted in court today to entering into collusive arrangements with individuals from Taylor Garbage Service to rig bids for waste-hauling, recycling, and related services. He admitted that these arrangements included, among other methods, the companies agreeing to not pursue the business of each other’s current customers and deciding in advance which company would win a bid. Adams further admitted that both companies agreed to submit a deliberately inflated bid or price quote – or not to submit a bid at all – to a customer to ensure the incumbent company would keep the contract. Adams further admitted that they deprived customers of their right to free competition and, in turn, forced customers to pay excessive prices for waste-hauling and related services. As part of his felony plea, Adams will pay $75,000 in criminal penalties.

For their role in the conspiracy, company employees Bert J. Adams and Christopher Kline each pleaded guilty today before the Honorable Carol A. Cocchiola in Binghamton City Court to the “A” misdemeanor count of Attempted Combination in Restraint of Trade and Competition, and will each pay $37,500 in criminal penalties.

Taylor Garbage Service, Inc. will pay $500,000 in civil penalties, and Robert Taylor, the company’s president and co-owner, will also pay a $50,000 penalty to New York State. The company also agreed to appoint a compliance officer to oversee the implementation of an antitrust compliance program.

In its settlement with the Attorney General’s Office, Taylor Garbage Service admitted to violating New York State’s Donnelly Act by, among other methods, routinely agreeing in advance with Bert Adams Disposal which company would win a particular bid, regularly submitting deliberately inflated bids and price quotes to prospective customers to ensure that the incumbent would keep its customer, and regularly exchanging information about rates they were charging customers and would be submitting in bids.

The terms of the settlements with Taylor Garbage Service and Mr. Taylor reflect the company’s early confession of its responsibility for the anticompetitive conduct and its prompt cooperation, including the disclosure of critical information in furtherance of the Attorney General’s investigation.

Click here for the settlement agreement with Taylor Garbage Service.

The investigation was led by Criminal Investigator Joel Cordone and Supervising Investigator Richard Doyle of the Criminal Enforcement and Financial Crimes Bureau, under the supervision of Deputy Chief Antoine Karam and Chief Dominick Zarrella.