Governor Andrew M. Cuomo recently announced three development teams from Upstate New York have been selected to respond to a Request for Proposals to design and build a new Exposition Building at the New York State Fairgrounds. The new 133,000 square foot facility will include flexible space for major events such as car shows and auctions, consumer and trade shows, motocross, equestrian events, equipment shows, and other events that complement and expand the Fairgrounds as a premier year-round destination. The State will privatize the management and promotion of non-Fair events at the Exposition Building. Construction may begin as early as November 2017, with a substantial completion date that will coincide with the 2018 State Fair and is expected to create over 700 construction jobs. Conceptual renderings are available here.

"With the brand new Exposition Building, we will bring the State Fair to even greater heights, attracting more visitors and revenue to the region and helping to drive economic growth in the community," Governor Cuomo said. "The State Fair is an iconic Central New York institution, and with our investments to build dozens of new exhibits, rides and attractions for fairgoers we are transforming the fair into a world-class tourist destination."

The Governor also kicked off the 2017 Great New York State Fair, celebrating several key components of his $120 million plan to revitalize the Fairgrounds in Onondaga County. These improvement projects, including a brand new Broadway Skyliner chairlift ride, renovations in the Indian Village and a new home for the popular New York State Police exhibit as well as brand new exhibits and programming, significantly enhancing the experience for visitors and ensure the Fair remains a top economic engine for the Central New York region.

Onondaga County Executive Joanie Mahoney said, "Onondaga County is proud to be home to the New York State Fair, a world-class attraction and economic driver. Thanks to Governor Cuomo's leadership and investments, the State Fair is better than ever before and we will continue to improve it to attract more visitors and revenue to Central New York. I invite everyone to bring their families to the Fair and experience all it has to offer."

"With the brand new Exposition Building, we will bring the State Fair to even greater heights, attracting more visitors and revenue to the region and helping to drive economic growth in the community."

The Exposition Building will be the largest exposition space north of New York City as well as the largest between Boston and Cleveland at 133,000 square feet. The new space will allow the New York State Fair to better compete for larger national and international events, including livestock, equestrian and sports events. With the Exposition Building, the Fairgrounds will have 450,000 square feet of air conditioned indoor space.

All teams that submitted responses to the Request for Qualifications, issued by the Office of General Services in July, have been deemed qualified to participate in the RFP.

The architecture of the new building will complement the historical style of the other buildings on the grounds and provide flexibility for a wide variety of events, including removable and retractable seating and accessibility for a minimum of 4,000 patrons.

The building will also feature a clear span of at least 250 feet and a clear height of at least 60 feet.

The building will have loading docks, large overhead doors, and spaces for pre-event functions, VIP attendance, concessions and catering. Site improvements, such as access roads, driveways, and utilities will be made. The design will also look to maximize green and sustainable infrastructure technologies. Conceptual renderings are available here.

Responses to the RFP will be due in October.

In addition, in order to maximize the use of the new Exposition Building and the entire 375-acre State Fair campus on non-Fair days throughout the year, the state will be issuing an RFP this fall for a non-Fair private events operator/manager to attract and promote additional shows and events.

Non-Fair events, including an estimated 90,000 who attended the Syracuse Nationals classic car show and two popular horse shows, have brought the 2017 total attendance year-to-date to 560,929 - already above the 529,000 attendance for all of 2016.

New Exhibits and Programming for 2017

In addition to announcing the RFP for the new Exposition Building, the Governor also toured several new aspects of the 2017 Fair.

The Broadway Skyliner, the brand-new chairlift ride, made its debut at the Wade Shows Midway with the Governor taking the very first ride today. The Skyliner was a part of Phase 2 improvements for the Fairgrounds. It lifts fairgoers approximately 34 feet in the air and take them on a seven minute, 1,400 foot ride from one end of the Midway to the other, more than a quarter mile. Every day, the first 100 passengers on the Skyliner ride for free.

The New York State Police Exhibit, one of the most popular stops of the Fair, has moved to a new home near the Horticulture Building in honor of its 100th anniversary. The area, which includes two buildings, has been renovated to include a new, steel tower Troopers will use for their daily rappelling demonstrations and a new dive tank. One of the buildings will include a simulator demonstrating the dangers of texting while driving, a forensic crime scene area, as well as a Wall of Honor to fallen Troopers and a place to sign up for the Trooper exam. The other building will house an exhibit celebrating the Troopers' Centennial.

In the Indian Village, a new Turtle Mound was renovated and restructured to resemble a turtle, an animal sacred to the Iroquois. It will be the home of the traditional dances that take place three times daily. The village also received new roofs on its buildings and other renovations.

Fairgoers will also have several new opportunities to learn about New York State agriculture. From new barn tours to an expanded Taste NY area in the Horticulture Building, the State Fair continues to promote the agricultural industry while celebrating its traditional favorites, such as the 25-cent cup of perfectly chilled milk and the $1 potato booth. 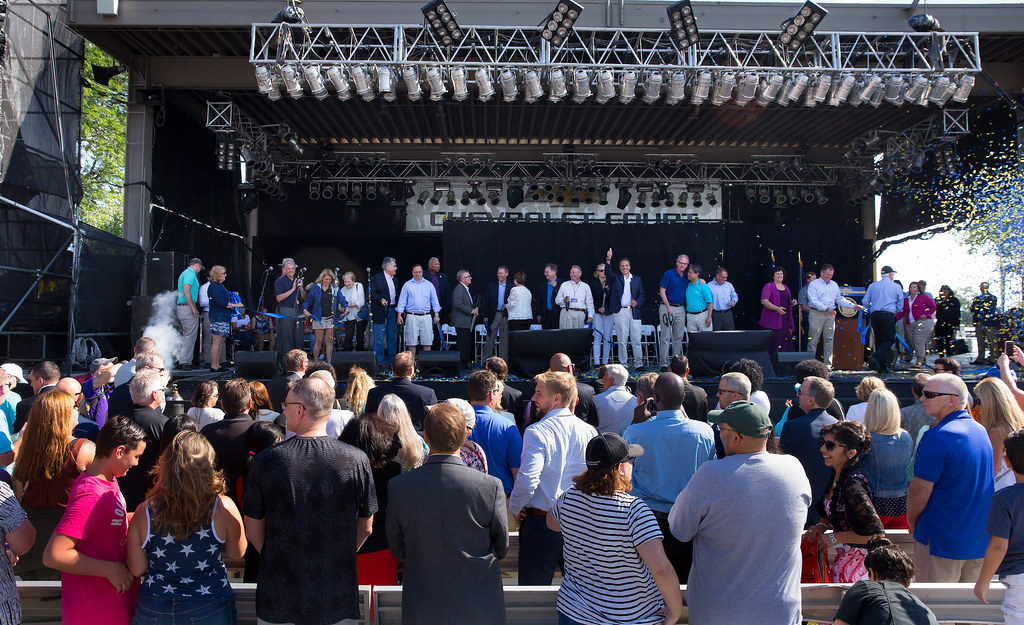 State Agriculture Commissioner Richard A. Ball said, "The New York State Fair just keeps getting better and better. Under the Governor's leadership and as a result of his vision, we have seen major improvements to the grounds over the last two seasons that are attracting more visitors and boosting the regional economy. This year, we are happy to celebrate the completion of several projects from Phase 1 and start the implementation process of Phase 2, all while honoring the Fair's tradition of agriculture, entertainment and family fun. We're looking forward to a great 13 days at the Fair this year."

OGS Commissioner RoAnn Destito said, "Governor Cuomo often talks about the amazing places to visit here in our State, and I can think of no better way to celebrate summer in Central New York than a day at the Fair. The Great New York State Fair is a tradition that has been shared by families, including mine, for generations. This is why I am so pleased that the Office of General Services helps make the experience better each year through improvements to the grounds, exhibits, and infrastructure."

Acting Fair Director Troy Waffner said, "It's incredible to look around at the Fairgrounds and see all of the pieces coming together. We're thrilled with the new improvement projects and the tremendous programming, new exhibits and entertainment we have in store for fairgoers this year. Add to that the excitement for the construction of the new Exposition Building, and this year promises to be the best one yet."

Today's announcement complements "Central NY Rising," the region's comprehensive blueprint to generate robust economic growth and community development. The State has already invested nearly $3 billion in the region since 2012 to lay the groundwork for the plan - capitalizing on global market opportunities, strengthening entrepreneurship and creating an inclusive economy. Today, unemployment is down to the lowest levels since before the Great Recession; personal and corporate income taxes are down; and businesses are choosing places like Syracuse, Oswego and Auburn as a destination to grow and invest in.

Now, the region is accelerating Central NY Rising with a $500 million State investment through the Upstate Revitalization Initiative, announced by Governor Cuomo in December 2015. The State's $500 million investment will incentivize private business to invest well over $2.5 billion - and the region's plan, as submitted, projects up to 5,900 new jobs. More information is available here.

The New York State Fair, operated by the New York State Department of Agriculture and Markets, runs from August 23 to September 4, 2017. The Fair's mission, reflected in its theme, "FIND YOUR GREAT," is to showcase the best of New York agriculture while providing top-quality entertainment.