EMILY's List works. The proof is in the numbers.

We were founded in 1985, and just one year later, the number of Democratic women in Congress started to climb.

The number of Republican women? Not so much. That's because there's no Republican equivalent to EMILY's List.

Our record of winning is long, but we're not done yet; not while women still make up less than half of Congress.

Donate $3 to build on our record of success and help elect even more pro-choice Democratic women.

This chart from the New York Times makes our impact crystal clear: 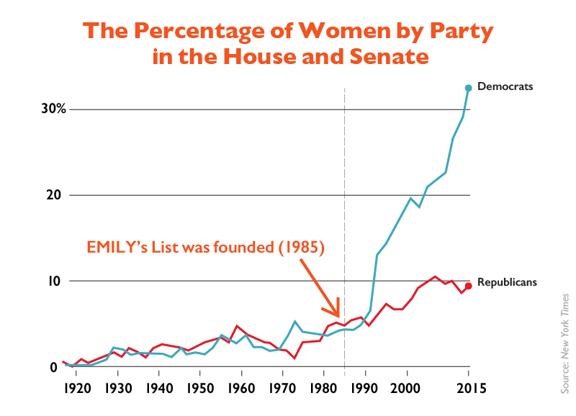 It is clear that, without us, the number of Democratic women in Congress would not have risen as fast as it has.

That chart is proof that when we organize and rally behind candidates together, we can make a difference. And as the new executive director of EMILY's List, I am committed to keep pushing that blue line upward with you.

Help elect even more pro-choice Democratic women this year and beyond. Donate $3:

Thanks, and go team!