On the fifth anniversary of Superstorm Sandy, Governor Andrew M. Cuomo announced a $354 million project to significantly improve the water quality of Long Island's Western Bays. This innovative solution to a persistent problem will divert treated waste from the Bay Park Wastewater Treatment Plant—through an abandoned aqueduct under Sunrise Highway—to the existing Cedar Creek outfall, which diffuses treated sewage nearly three miles into the Atlantic Ocean. The project will prevent the discharge of 19 billion gallons of treated sewage into the warm, shallow Western Bays each year, eliminating harmful nitrogen pollution to jump start the rejuvenation of vital marshlands that protect communities from waves and storm surge. New York State and Nassau County are investing $277 million in the project with the remaining funds being provided by federal sources.

"New York is building back better and smarter than ever before, and we are committed to upgrading our infrastructure to protect our water quality and natural resources," said Governor Cuomo. "This project will permanently remove tens of billions of gallons of sewage from the Western Bays, restoring our natural barriers to extreme weather and revitalizing our most critical ecosystems."

Built in 1949, the Bay Park facility serves more than 500,000 Nassau County residents and discharges an average of 52 million gallons of treated sewage into Reynolds Channel each day. This discharge impacts nearly 10,000 acres of water and tidal marshland in the Western Bays, from Atlantic Beach to Point Lookout, including Hewlett Harbor and Baldwin Harbor. Due in large part to nitrogen in the treated sewage from the Bay Park plant, the Western Bays has become impaired by significant blooms of macro-algae and other related water quality impacts, such a low dissolved oxygen. Peer-reviewed scientific studies have also linked excess nitrogen to the damage and ultimate disintegration of coastal marsh islands that serve as a resilient barrier to storm surge and associated waves.

New York is building back better and smarter than ever before, and we are committed to upgrading our infrastructure to protect our water quality and natural resources.

Long considered an intractable and expensive problem, this bold, creative solution, when completed, will allow for the rapid and dramatic ecological recovery of the Western Bays at a substantially lower cost and shorter construction schedule. Previous proposals to build a brand-new ocean outfall from the Bay Park facility into the Atlantic would have cost more than $600 million and taken nearly a decade to construct.

However, experts from the New York State Department of Environmental Conservation and Nassau County uncovered an unused 100-year old aqueduct in usable condition that can be connected to the existing Cedar Creek ocean outfall, saving at east $200 million and ensuring the project will rapidly advance.

The project will discontinue use of the Reynolds Channel outfall and construct a two-mile, 72-inch connecting pipe system north from Bay Park WWTP to the county-owned aqueduct that runs under State Route 27. The project will also rehabilitate an eight-mile stretch of the aqueduct by removing the 10 gate valves and slip-lining the 72-inch abandoned main with a fiberglass pipe. Additionally, the project will install a two-mile, 72-inch connecting pipe from the aqueduct to the existing Cedar Creek outfall pipe, which is six and a half miles long and will carry treated effluent nearly three miles into the Atlantic Ocean.

In January 2014, New York State announced $810 million for the multi-year resilient rebuild the Bay Park facility after damage sustained in Superstorm Sandy. The project includes the repair and upgrade of numerous treatment systems, collection systems, pump stations, and the installation of engineered structures to protect the plant from a 500-year level storm, a storm that exceeds the intensity of Superstorm Sandy. 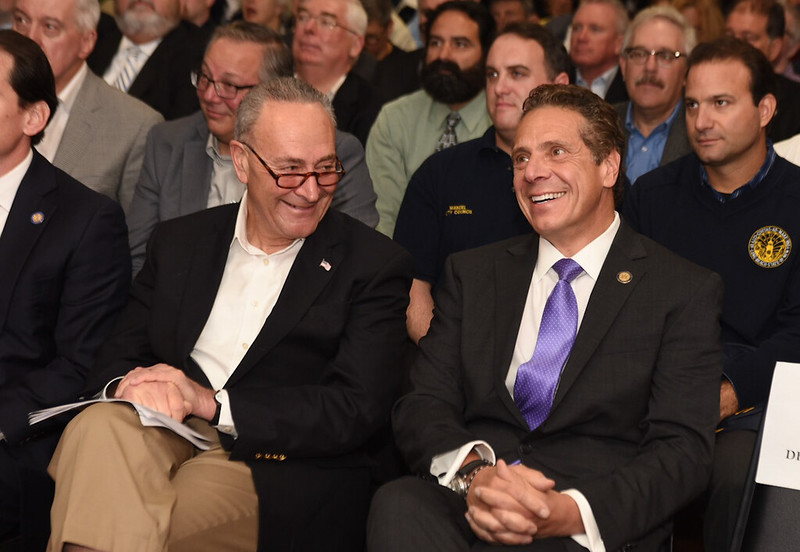 U.S. Senator Charles Schumer said, Today's announcement is signed and sealed proof that the federal money secured after Superstorm Sandy was a miracle-maker for so many people and vital projects. Diverting sewage from Bay Park to the Cedar Creek outfall pipe is one of the last puzzle pieces we need to rebuild, modernize and transform the Bay Park Sewage Treatment Plant and restore the health of the Western Bays. Instead of defiling the water ways with countless tons of life-crushing nitrogen pollution, the health of the wetlands will be restored, serving as a vital bulwark against future flooding and storm surges. And everything from fishing, to boating, to swimming may once again be possible. Five years later we are stronger, we are better and we will continue to finish the job, which includes demanding FEMA sign the dotted line and deliver us this final puzzle piece."

Department of Environmental Conservation Commissioner Basil Seggos said, "Governor Cuomo has prioritized improving Long Island's resiliency and this project, combined with transforming and hardening the Bay Park plant to withstand a 500-year storm, is a demonstration of how to build back smarter given the realities of climate change, sea-level rise, and extreme weather. This agreement reached today is a testament to the Governor's ongoing leadership and will result in the rapid reduction of nitrogen which has impaired the Western Bays and will greatly advance our ongoing restoration efforts in this critical ecosystem."

Sabrina Ty, President and CEO of the Environmental Facilities Corporation said, "EFC is proud to have provided financial assistance for these critical upgrades to the Bay Park Treatment Plant. Governor Cuomo has led the way to ensure that our wastewater facilities are sustainable, and protective of our water resources."

At an additional cost of more than $30 million, Nassau County has agreed to install two nitrogen treatment systems at its Bay Park facility that will reduce nitrogen concentrations in treated sewage by up to 50 percent.

Senator Todd Kaminsky said, "For decades the Western Bays have been poisoned by treated effluent from the Bay Park Sewage Treatment Plant. Now, through the leadership of Governor Cuomo, we are moving forward with this innovative and game-changing solution. This is the beginning of the resurgence of the Western Bays."

Senator John E. Brooks said, "Today, five years after Sandy, we are still taking steps to harden our infrastructure and strengthen our neighborhoods to protect against Mother Nature's future fury. With today's Bay Park announcement, the Governor's commitment to Long Island has once again been made abundantly clear. Families across Long Island can rest assured that under Governor Cuomo's leadership, our wastewater systems are being reinforced against future extreme weather. This project will help preserve the Island's unparalleled natural resources, protect our many bays and waterways while ensuring the water we drink is clean and safe."

Assemblymember Melissa Miller said, "Hurricane Sandy opened our eyes to the tremendous damage Mother Nature can create. In the aftermath of the superstorm, we've been building back stronger than ever. Thanks to the leadership of Governor Cuomo, we are prioritizing resiliency and ensuring that New York's water infrastructure can sustain us for generations, including the Bay Park Treatment Plant. This investment will build on our progress and ensure our vital water sources are well protected."

Nassau County Executive Mangano said, "Today's announcement represents yet another milestone down the path of recovery from the devastation of Hurricane Sandy five years ago. The remarkable reconstruction of the Bay Park facility has shown that we still have the ability to think big and get the job done, and the new announcement will continue our efforts to protect our environment and ensure we are prepared the next time we face the fury of Mother Nature. Governor Cuomo was there for us in the immediate aftermath of the storm, and he has continued to be by our side at every step of the way."

Long Beach City Manager Jack Schnirman said, "This is a decades in the making step towards cleaning up Reynolds Channel, and this smart investment will help ensure our precious water resources are no longer degraded by nitrogen, and other byproducts of sewage processing. The Governor has shown today that he remains committed to a stronger, smarter and safer Long Island and protecting the people of this state. I'm proud to support this critical project as it improves the environment and economy for our residents, and surrounding communities, for generations to come."

Executive Director of the Citizens Campaign for the Environment Adrienne Esposito said, "Governor Cuomo's unwavering support for New York's natural resources has been critical to preserving and protecting our water resources. Upgrading Bay Park and providing an ocean outfall will provide a legacy of clean bays, safe shellfish beds and a return of our maritime culture. Citizens Campaign for the Environment, Operation Splash, Sludge Stoppers, The Nature conservancy and community residents far and wide have worked for 20 years to upgrade this infrastructure and restore these bays that we love. One ocean outfall pipe will provide generations of families the ability to swim, fish, clam, and love the waters we call home. We are thrilled that state and local partners will work together to ensure clean and safe beaches and bays along our south shore."

Stuart F. Gruskin, chief conservation and external affairs officer for The Nature Conservancy in New York said, "Thank you to Governor Cuomo, NYS Department of Environmental Conservation, Nassau County and our partners including the Western Bays Coalition for work to ensure that one of the most serious outstanding post-Sandy environmental and human health issues -- the redesign of the Bay Park sewage treatment plant -- is finally addressed. Today's announcement means less nitrogen pollution in our water, and more resilient, healthy bays and people on our South Shore."

Under the Governor's leadership, New York is leading a number of initiatives to improve water quality on Long Island, including a $5 million Long Island Nitrogen Action Plan and $10.4 million shellfish restoration program. A major goal of the Governor's collaborative Long Island Nitrogen Action Plan is to cure the water quality impairment of the Western Bays, and ultimately all of Long Island. The transformative actions announced today are on top of the Governor's historic $2.5 billion Clean Water Infrastructure Act adopted in the 2017-18 State budget and the $300 million Environmental Protection Fund. It is projected that for every $10 million spent on clean water infrastructure 160 jobs are created.