A vast network of online marketers and the three people behind it have agreed to settle Federal Trade Commission charges that they sold more than 40 weight-loss, muscle-building, and wrinkle-reduction products to consumers using unsubstantiated health claims, fake magazine and news sites, bogus celebrity endorsements, and phony consumer testimonials.

The FTC also alleges that the defendants used deceptive offers of “free” and “risk-free” trials, and automatically enrolled consumers without their consent in negative option auto-ship programs with additional monthly charges.

The court order settling the FTC’s charges imposes a judgment of $179 million – the amount that the FTC alleges consumers nationwide paid the defendants over a period of more than five years – which will be suspended after the defendants pay approximately $6.4 million to the Commission. It also prohibits the defendants from using the deceptive marketing tactics that they had allegedly used to promote their products and bans them in part from future negative option sales.

According to the FTC’s complaint, defendants Richard Fowler, Ryan Fowler, Nathan Martinez and the 19 companies they control (collectively operating as Tarr, Inc.) used fake media websites with domain names that appeared to be legitimate news or magazine sites, such as goodhousekeepingtoday.com, menshealth.com.

These fake sites had mastheads for what appeared to be legitimate news and journal organizations, including Men’s Health, Good Housekeeping, and Everyday with Dr. Oz. The sites featured reporters and celebrities, like Paula Deen, Dr. Oz, Jennifer Aniston, and Jason Statham, who supposedly used the products themselves and experienced dramatic results. The FTC alleges that these celebrities never endorsed the defendants’ products. 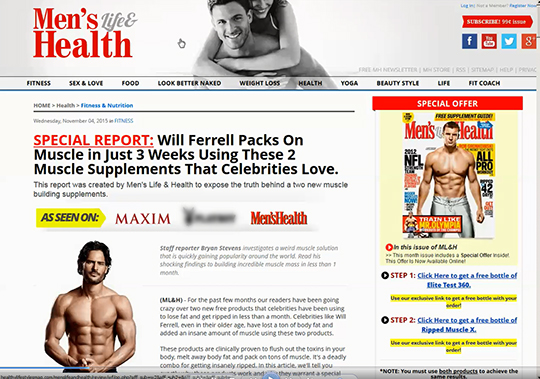 The sites contained false claims that users would quickly and easily become wrinkle-free, add many pounds of muscle, or lose significant weight without changes to diet or exercise, the FTC contends. An advertisement for one of the defendants’ biggest sellers, the “Miracle Garcinia Cambogia” weight-loss product, claimed: “I lost 23 lbs in 5 Weeks, No Special Diet, No Intense Exercise.” Meanwhile, consumers were lured into buying the defendants’ anti-wrinkle products through advertising claims such as, “LOOK 10 YEARS YOUNGER IN LESS THAN 4 WEEKS.” The FTC alleges the advertisements also falsely stated that the products’ dramatic results were supported by clinical studies.

The websites failed to disclose that consumers who signed up for the supposedly free trial offers would be enrolled in negative option continuity programs, through which they would be charged for the initial supply of the products if they did not cancel within a short period of time, and then be billed about $87 every month thereafter.

As a result, many consumers who signed up for what they thought were no cost, risk-free trials of the products, were unwittingly charged hundreds of dollars for often unwanted products. In addition, although the websites promised that the trial offers were “risk free” and “guaranteed 100% satisfaction,” the complaint alleges that the websites did not clearly disclose the steps consumers needed to take to cancel their orders and avoid being charged.

The complaint also alleges the defendants created different versions of websites for their products, in an apparent effort to conceal their deception from law enforcers like the FTC, as well as banks and payment processors. The decoy websites featured more-prominent disclosures, and the defendants shared these with banks and processors as part of their applications for merchant accounts that would allow the defendants to process payments for online purchases by consumers. They maintained alternative sets of webpages with inadequate disclosures, or in some instances no disclosures at all, and took steps to ensure that these were the versions of the websites that most consumers would encounter when purchasing the products.

Based on this alleged conduct, the complaint charges the defendants with violating the FTC Act, the Restore Online Shoppers’ Confidence Act (ROSCA), and the Electronic Funds Transfer Act (EFTA).

If the defendants choose to use negative option programs for other products, they are required to provide enhanced disclosures, to secure consumers’ express informed consent before purchase, and to provide a simple mechanism to stop recurring charges, using the same medium that the consumer used to purchase the product.

The Commission vote approving the complaint and proposed stipulated final order was 2-0. The order was signed by Judge Larry A. Burns of the U.S. District Court for the Southern District of California. A complete list of defendants can be found in the documents on the case docket page.

NOTE: The Commission files a complaint when it has “reason to believe” that the law has been or is being violated and it appears to the Commission that a proceeding is in the public interest. Stipulated final injunctions/orders have the force of law when approved and signed by the District Court judge.