FTC Alerts Consumers: If Scammers Had You Pay Them Via Western Union, You Can Now File a Claim to Get Money Back

The Federal Trade Commission is alerting consumers who lost money to scammers who told them to pay via Western Union’s money transfer system between January 1, 2004 and January 19, 2017, that they can now file a claim to get their money back by going to FTC.gov/WU before February 12, 2018.

“American consumers lost money while Western Union looked the other way,” said FTC Acting Chairman Maureen K. Ohlhausen. “We’re pleased to start the process that will get that money back into consumers’ rightful hands.”

“Knowing that its agents were involved in fraudulent schemes – and knowing that it had a legal obligation to detect and report this criminal conduct to the authorities – Western Union failed to act, leading to massive victim losses,” said Acting Assistant Attorney General Blanco. “Returning forfeited funds to these victims and other victims of crime is one of the Department’s highest priorities. I want to commend our prosecutors, the FTC, and our law enforcement agent partners for their hard work that led to vindicating the rights of these victims.”

The refund program follows a settlement with the Western Union Company, which in January 2017 agreed to pay $586 million to resolve charges brought by the FTC and the U. S. Department of Justice. The FTC alleged that fraudsters were able to use Western Union’s money transfer system to get payments from their victims, even though the company was aware of the problem and received hundreds of thousands of complaints about fraud-induced money transfers made for fraudulent lottery and prizes, family emergencies, advance-fee loans, online dating and other scams. The company also allegedly failed to promptly discipline problem Western Union agents, and failed to have effective anti-fraud policies and procedures.

Affected consumers should go to FTC.gov/WU to file claims, learn more, or get updates on the claims process – this infographic describes the process for filing a claim.

Some people who have already reported their losses to Western Union, the FTC, or another government agency will receive a form in the mail from the claims administrator, Gilardi & Co. The form will have a Claim ID and a PIN number to use when filing a claim online via FTC.gov/WU. Gilardi was hired by Justice Department, which is responsible for returning victims’ money as part of its settlement with Western Union.

Filing a claim is free, so consumers should not pay anyone to file a claim on their behalf. No one associated with the claims process will call to ask for consumers’ bank account or credit card number.

The FTC’s case was investigated with the assistance of the U. S. Department of Justice, the U.S. Postal Inspection Service, the Federal Bureau of Investigation, the Toronto Police Service Financial Crimes Unit, the Canadian Anti-Fraud Centre, the Royal Canadian Mounted Police, the Spanish National Police, and the Offices of the Attorney General for Arizona, Minnesota, and Vermont.

The Federal Trade Commission works to promote competition, and protect and educate consumers. You can learn more about consumer topics and file a consumer complaint online or by calling 1-877-FTC-HELP (382-4357). Like the FTC on Facebook (link is external), follow us on Twitter (link is external), read our blogs and subscribe to press releases for the latest FTC news and resources. 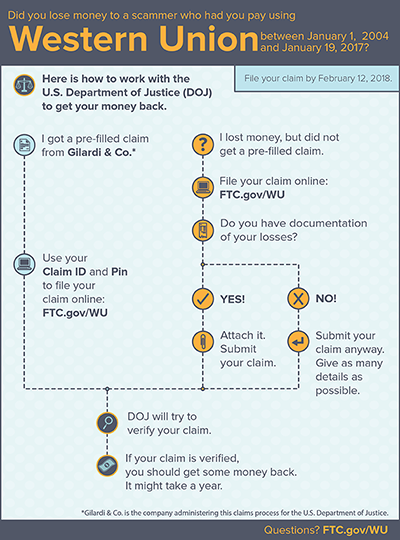