It could also reduce water stress, according to a new study that includes 14 major food crops from around the world

The Earth Institute at Columbia University 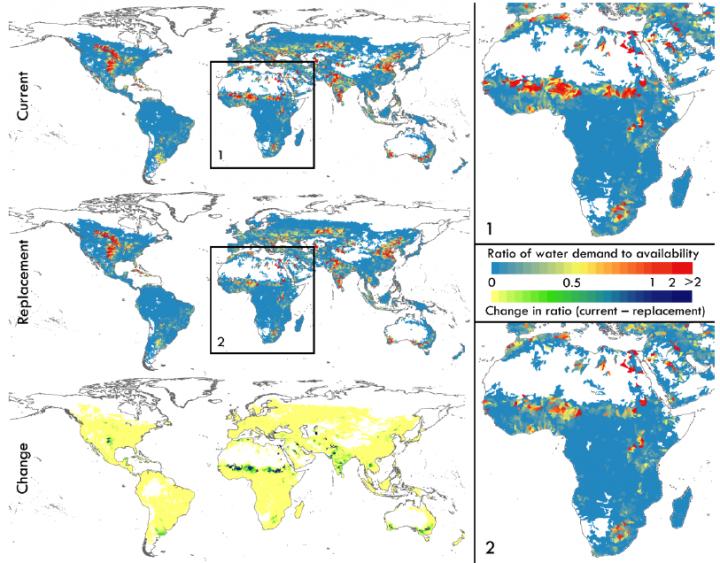 Redrawing the global map of crop distribution on existing farmland could help meet growing demand for food and biofuels in coming decades, while significantly reducing water stress in agricultural areas, according to a new study. Published today in Nature Geoscience, the study is the first to attempt to address both food production needs and resource sustainability simultaneously and at a global scale.

The results show that "there are a lot of places where there are inefficiencies in water use and nutrient production," says lead author Kyle Davis, a postdoctoral researcher with Columbia University's Earth Institute. Those inefficiencies could be fixed, he says, by swapping in crops that have greater nutritional quality and lower environmental impact.

Agricultural demand is forecasted to grow substantially over the next few decades due to population growth, richer diets, and biofuel use. Meanwhile, water stress is expected to worsen with climate change and as global aquifers are rapidly depleted. In an attempt to address these twin challenges, the authors looked at crop water-use models and yield maps for 14 major food crops. They were specifically interested in identifying crop distributions that would make rain-fed production less susceptible to dry spells and reduce water consumption in irrigated systems.

The researchers chose to focus on 14 crops that make up 72 percent of all crops harvested around the world: groundnut, maize, millet, oil palm, rapeseed, rice, roots, sorghum, soybean, sugar beet, sugarcane, sunflowers, tubers and wheat. Fruits and vegetables were not included because good data on their water requirements were not available.

The new crop maps that Davis and his colleagues propose would produce 10 percent more calories and 19 percent more protein--enough to feed an additional 825 million people--while reducing consumption of rainwater by 14 percent and irrigation water by 12 percent.

Globally, such improvements would be achieved by dramatically increasing production of groundnuts, roots, soybeans, sorghum and tubers and decreasing millets, rice, sugar and wheat, which consume more water but have lower calorie and protein yields per hectare. But the specific changes vary widely by country and water use type due to differences in local climate, soil characteristics and crop yields. For instance, rain-fed sorghum, soybeans, tubers and wheat could replace millets, sugar beet and sunflower in western Russia. Irrigated maize, millet, roots and tubers supplanted rice, sorghum and wheat in northern India.

The study identified crop redistributions that would create substantial water savings--at least 20 percent of water demand for agricultural production--for 42 countries, many of which are already under significant water stress. These include Australia, India, Mexico, Morocco and South Africa. Major water savings were also achieved in significant global agricultural centers, such as California's Central Valley, the Nile Delta, Southeastern Australia and the Indo-Gangetic basin. Water scarcity persisted in other important agricultural areas, such as the US Midwest, however, regardless of crop choice. For another 63 countries, most of which rely heavily on food imports to feed themselves, the redistributions would generate a greater than 20 percent rise in either calorie or protein production, increasing food self-sufficiency. These included Ethiopia, Iran, Kenya and Spain, among others.

In recent years, some researchers have advocated meeting rising global crop demand via technology or increasing the use of water and fertilizer. But big technology investments would be out of reach for small rural farmers, and many of the water efficiency methods proposed to protect against water stress--such as increasing irrigation efficiency and planting higher-yielding crops, decreasing animal protein in diets, and minimizing food waste--face significant barriers to implementation, the study notes, including economic, health-related, infrastructural and environmental issues.

The new paper's crop distribution model would not require massive technology investments. Nor would it result in a loss of crop diversity or soil nutrients, which might otherwise make agriculture more vulnerable to drought, pests and other shocks. Still, Davis says the findings are really just a starting point, not a final solution. The research did not take into account potential cultural or political barriers, market supply and demand, dietary preferences or consumption patterns, which would need to be examined in future research. The findings "can be used as one of several tools in making food systems more sustainable," he says.

Davis is now conducting a follow-up study in India, where rice and wheat are heavily subsidized. He and his colleagues are examining the impact that swapping higher nutrient traditional cereals into that subsidy program would have on water use and nutrient production, how these alternative cereals would need to be to priced to compete in the market, and how consumption patterns and dietary preferences might influence their adoption.

"If we think about the economic, social, and environmental aspects of food security in a particular country and work closely with local decision-makers, we can create solutions tailored to the needs and goals of that country's people," says Davis.