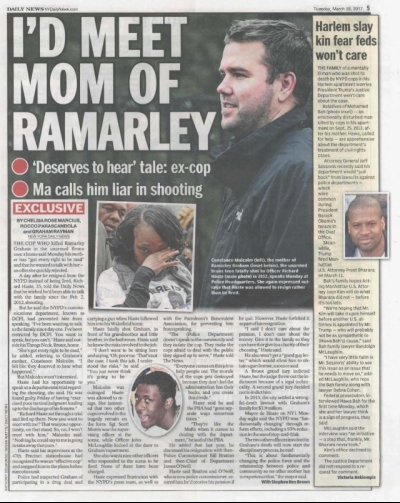 The family of a mentally ill man who was shot to death by NYPD cops in his Harlem apartment worries President Trump’s Justice Department won’t care about the case.

Relatives of Mohamed Bah-an emotionally disturbed man killed by cops in his apartment on Sept. 25, 2012, after his mother, Hawa called for help-are apprehensive about the department’s treatment of civil rights cases.

Attorney General Jeff Sessions recently said his department would “pull back” from lawsuits against police departments-which were common during President Barack Obama’s tenure in the Oval Office.

“We’re hoping that Mr. Kim will take it upon himself before another U.S. attorney is appointed by Mr. Trump-who will proably not be as sympathetic to (Hawa Bah’s) cause,” said Bah family lawyer Randolph McLaughlin.

“I have very little faith in Mr. Sessions’ ability to see this issue as an issue that he needs to move on,” added McLaughlin, who reps the Bah family along with lawyer Debra Cohen.

Federal prosecutors interviewed Hawa Bah for the first time Monday, Which she and her lawyer think is a sign of progress, they said.

The Justice Department did not respond to a request for comment.