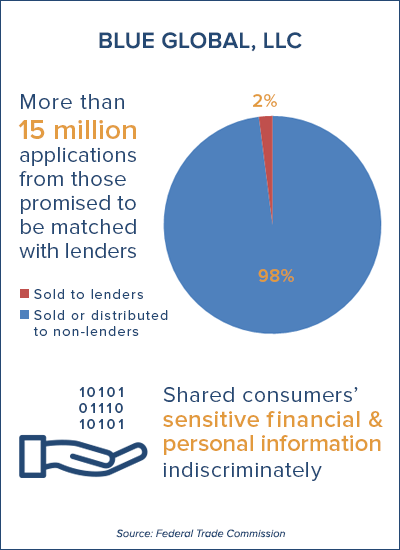 The operators of a lead generation business have agreed to settle charges brought by the Federal Trade Commission that the company misled consumers into filling out loan applications and sold those applications – including consumers’ sensitive data – to virtually anyone willing to pay for the leads.

In its complaint, the FTC alleges that Blue Global Media, LLC and its CEO Christopher Kay operated dozens of websites that enticed consumers to complete loan applications that the defendants then sold as “leads” to a variety of entities without regard for how the information would be used or whether it would remain secure.

The websites, which operated under such names as 100dayloans.com, 1hour-advance.com, cashmojo.com and clickloans.net, offered services to consumers seeking a variety of loans, including payday and auto loans. The company claimed it would search a network of 100 or more lenders, and connect each loan applicant to the lender that would offer them the best terms. The FTC charged that, in reality, the defendants:

The company also promised to protect and secure the sensitive information consumers provided, such as Social Security numbers and bank account numbers, claiming the information was only provided to “trusted lending partners.” The FTC alleges, however, that the company provided the complete loan application data submitted by consumers to any potential buyer without conditions and with little regard to how it would be used. The complaint further alleges that this sensitive personal and financial information was shared and sold indiscriminately without consumers’ knowledge or consent. When consumers complained that their information was being misused, Kay and his company did not investigate or take preventative action, the FTC alleges.

As part of the settlement with the FTC, the defendants are prohibited from misrepresenting that they can assist in providing loans on favorable rates and terms, that they will protect and secure personal information collected from consumers, and the types of businesses with which they share consumers’ personal information. Under the stipulated order, the defendants also are required to investigate and verify the identity of businesses to which they disclose consumers’ sensitive information, and must obtain consumers’ express, informed consent for such disclosures.

The settlement includes a judgment for more than $104 million, which represents the revenue defendants obtained by selling consumers’ loan applications as leads. The judgment is suspended based on defendants’ inability to pay.

NOTE: The Commission files a complaint when it has “reason to believe” that the law has been or is being violated and it appears to the Commission that a proceeding is in the public interest. Stipulated final orders have the force of law when approved and signed by the District Court judge.