In a June 20th NBC Latino op-ed, Dr. Stella M. Rose posed the question, "Who is standing up for Latinos?" As the Trump administration moves increasingly to the Right, this question resonated with our readers. While there is a general skepticism about the poor state of national Latin leadership, there was also not much support for the need for a high-profile national Latino leader.

In his response to Rouse, Howard Jordan argues that "Prominence is not power." He elaborates:.

Does the Latino community really need a national, cacique-type leader who is often "romanticized" as someone who can resolve our many problems? Do we need a voice . . . Or many voices? Yes, the African-American community has highly recognized photo opportunity-celebrity leaders like Jackson, Sharpton, etc. But the economic and political conditions in the black community have gotten worse despite this.

For her part, Rouse concludes that:

The void in Latino national leadership is nothing new and perhaps not so surprising, given the diversity of group characteristics and group interests. However, in light of their ever increasing numbers, at a time when Latinos need a prominent and influential voice to promote their interests and oppose detrimental policies, the deficit in Latino leadership is all the more striking. Without individuals that can stand up to the current political environment, Latinos will likely continue to find themselves marginalized.

Which is it? To have or not to have a national Latino leader? Rouses' conclusion is based on the survey results as a need expressed by Latinos themselves. Jordan's critique rests on a skeptical view on the state of current Latino leadership. Both a critical of Latino leadership but come to their conclusions coming from an optimistic or pessimistic perspective.

Rouse was kind enough to share the actual data from her survey. We present these and try to provide further interpretation of its findings. Her analysis is based on the rests of the latest University of Maryland Critical Issues Poll that were fielded by Nielsen Scarborough on April 12 to 17, with a sample size 2,138 and margin of error ±2.12 percent. She found that:

Taking a second look at the Rouse survey, we add a few more observations: 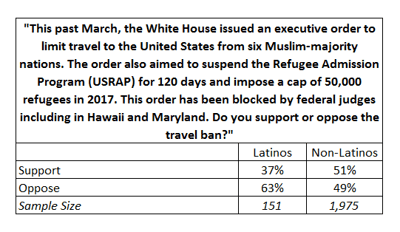 As with the ICE raids, a large majority of Latinos (63 percent) oppose the travel ban, while a slight majority of non-Latinos (51 percent) support it. This is a good indicator how Latinos are taking the Muslim travel ban as a generally anti-immigrant policy although it doesn't apply directly to them. 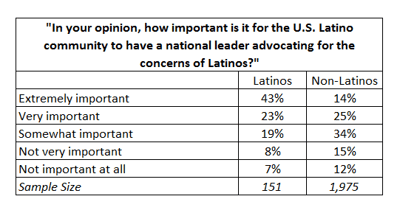 While a majority of Latinos (66 percent) believe it is very and extremely important to have a national leader to advocate for their concerns, only 39 percent of non-Latinos agreed, For Latinos, there seems to be some urgency expressed with the largest group, 43 percent, feeling that this is "extremely important." The difference between the two groups is probably situational --- Latinos feel marginalized and express needing a voice, while non-Latinos may see themselves as the targets of Latino claims. 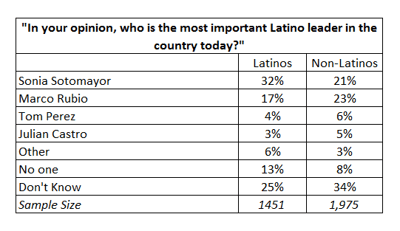 There was some slight disagreement between Latinos and non-Latinos about who is the most important Latino leaders in the country today. The first choice of Latinos was Supreme Court Justice Sonia Sotomayor, (32 percent) followed by US Senator Marco Rubio (17 percent), Tom Perez (4 percent) and Julian Castro (3 percent). The non-Latino list was similar except that Marco Rubio came first (23 percent), Followed by Sotomayor (21 percent).

These results were surpisingly similar to a 2013 NiLP Latino leadership survey. Asked who they condifed the most infleuntial Latino leaders, the top three selected were Supreme Court Justice Sotomayor (20 percent), Congressman Luis Gutierrez (15 percent) and Senator Rubio (12 percent). Among leaders. the percentages were lower than in the Rouse survey and the top selctions also also did not include Mexican-Americans.

As Rouse points out, the choices in her survey appear (as are those in the NiLP one) to be based mainly on the media exposure of these individuals that were selected, with little bearing on the advocacy needs of the community. This pointsou the importance of the media in identifing Latino spokepersons and the need to advocate for better representation of Latinos at all levels in the nation's news organizations.

Sotomayor, as a Supreme Court Justice, is very limited in the type of public positions she can take as an individual. Marcos Rubio's tea party-based politics are almost completely out of the mainstream of the Latino community. The extremely low levels of recognition of both Castro and Cruz do not speak well of the Democratic Party's record of developing and promoting Latino leaders. It is also interesting that the top three identified as most important leaders were all non-Mexican-Americans when Mexican-Americans are the majority of Latinos in the United States.

What this survey clearly shows is that, to no great surprise, Latinos feel completely shut out of the Trump administration and are fully against its immigration policies. However, this community's ability to respond to these challenges is seen as hampered by the lack of outspoken Latino leadership. Rouse's interpretation of this as calling for one national Latino leader who can be a voice for the entire community is perhaps too narrow because the survey results could also be interpreted as calling for multiple voices. These should, however, be able to high-profile enough toproject nationally. The survey question specified a "national leader" but this could have been interpreted more broadly by the respondents since they had no alternatives presented to them in the survey..

The inability of the Latino respondents to identify leaders who could accurately advocate on their issues is troubling in revealing a deep leadership vacuum. While Rouse points to the diversity of the Latino population as a cause, it is also important to understand that they majority of Latinos are Mexican-Americans, making this population at the national level not all that diverse in terms of national origin.

We have also found that as with the survey's findings that Latinos generally agree in opposing Trump's immigration policies, there is broad Latino agreement on most policy questions. The reasons for this leadership vacuum are, therefore, to be found elsewhere. It may be in part due to the Latino community's relationship to the Democratic Party, or to its geographic characteristics, or basic language barriers. This clearly is a question that requires much further and deeper analysis.

There is a need to acknowledge that there is a difference between local and national leadership. Some, like Jordan, do not see the value of national leaders because they give greater weight to local ones that are closer to the community, providing multiple voices. However, the lack of strong and identifiable Latino voices at the national level are also needed and play a different role than local ones. There are national structures, like the federal government and the national news media, where Latino voices seem to be largely missing and not affecting important national debates. It is also significant that Rouse feels that our national organizations, like the National Council of La Raza (NCLR), are not playing this role. It is perhaps time to take a brutally hard look at why this is the case.

This leaves us with the question: Do we need a national leader or leaders? If this survey is correct in identifying a serious leadership vacuum among Latinos at the national level, then the answer is "Yes." What form this would take is another question. Should it be like a Latino Al Sharpton or Jesse Jackson, should we clone Congressman Luis Gutierrez to take on other issues beyond immigration and Puerto Rico? Or something else? How does such leadership emerge? We definitely need to give these questions more coco as a community.

Although politics today under a Trump Presidency makes it feel that we are living in something likeThe Matrix, the answer to our national leadership deficit is not the emergence of a Morpheus to identify a Latino Neo. That's a movie, and we're dealing with real life and the national Latino leadership vacuum will, unfortunately, take more than a red pill to fill.

Angelo Falcón is President of the National Institute for Latino Policy (NiLP). He is a co-editor of "Latinos in New York: Coimmunities in Transition, 2nd Ed.", published by the University of Notre Dame Press. He can be reached at afalcon@latinopolicy.org.