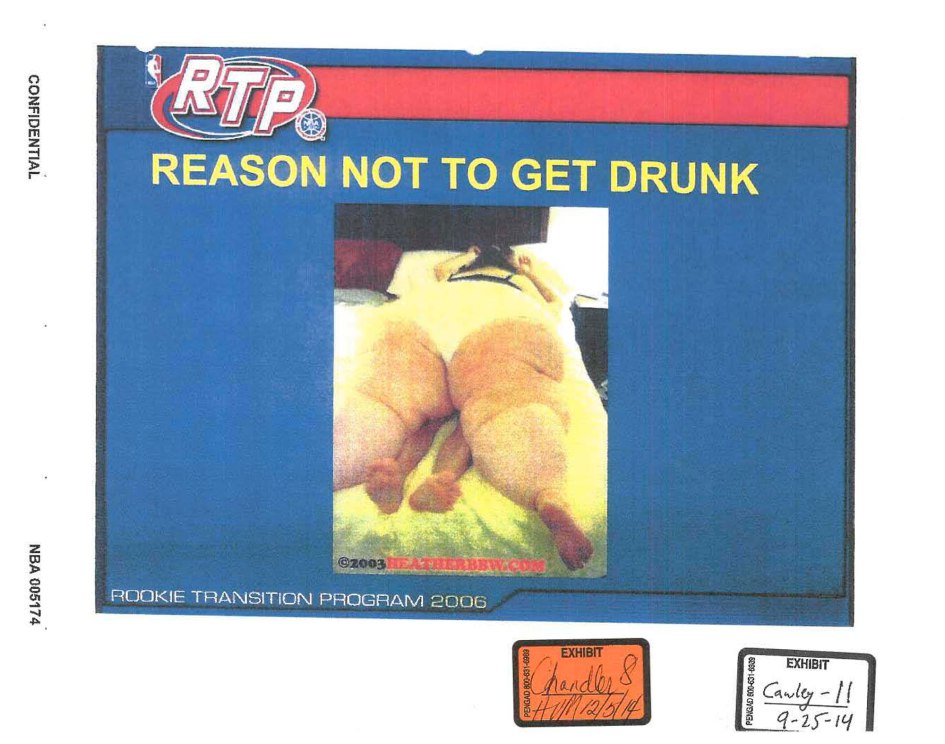 NBA officials displayed naked misogyny by using grotesque images of an obese woman smothering a man in bed to teach rookie players how not to behave off the court, a judge ruled.

The pictures were made public as part of a NBA employee’s sex harassment lawsuit in Manhattan Supreme Court.

“Photographs used in an orientation program for NBA rookies, one depicting a scantily clad obese woman on top of a slight man and another depicting Osama Bin Laden’s head superimposed on women’s bodies, both demean women and represent a culture of sexual harassment and misogyny,” Manhattan Judge Lucy Billings wrote early in April.

The obese woman’s photo, under the words, “REASON NOT TO GET DRUNK,” was included in a 2006 “Rookie Transition Program.”

The picture showing bin Laden’s head on the body of a busty woman wearing a T-shirt with the words “I wish these were brains” was distributed in NBA emails.

Billings found that the photos were necessary evidence to prove Glover’s claims of a hostile work environment. Before her ruling, the pictures were barred from the case under a 2012 confidentiality agreement between the NBA and Warren Glover, its ousted security chief.

Glover, a former NYPD lieutenant, was fired in 2011 after standing up for female NBA staffers who complained about sexual harassment and backing a harassment suit filed by former coworker Annette Smith, his suit says.

Smith left the NBA after refusing to use another offensive image of a fat woman in promotional material. She eventually settled her sexual harassment suit against the NBA.

The NBA was desperate to prevent the embarrassing material from being released, claiming in court papers that Glover and his attorney Randolph McLaughlin, of the law firm Newman Ferrara, were simply using the threatened unsealing as pressure to settle his 2011 discrimination suit.

“What really troubled us the most here was the NBA’s effort to keep this story secret, to cover it up so that no one would know what went on in their own offices,” McLaughlin told The Post.

The lawyer noted that the NBA moved to oust long-time Los Angeles Clippers owner Donald Sterling over alleged racist comments in 2014. “The NBA is quick to punish Mr. Sterling out in California for his stupid acts [and] athletes who make mistakes,” McLaughlin said. “But when the dirt happens in their own backyard they sweep it under the rug.”

At a hearing May 5, McLaughlin will move to block the NBA’s motion for an expedited decision ahead of a trial. Glover wants the case to be decided by a jury.

An NBA spokesman did not immediately reply to a request for comment.