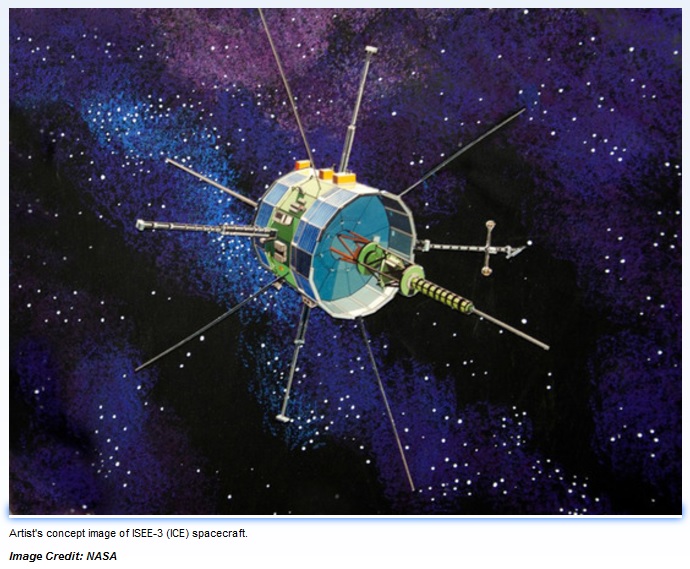 NASA has given a green light to a group of citizen scientists attempting to breathe new scientific life into a more than 35-year old agency spacecraft.

The agency has signed a Non-Reimbursable Space Act Agreement (NRSAA) with Skycorp, Inc., in Los Gatos, California, allowing the company to attempt to contact, and possibly command and control, NASA’s International Sun-Earth Explorer-3 (ISEE-3) spacecraft as part of the company’s ISEE-3 Reboot Project. This is the first time NASA has worked such an agreement for use of a spacecraft the agency is no longer using or ever planned to use again.

The NRSAA details the technical, safety, legal and proprietary issues that will be addressed before any attempts are made to communicate with or control the 1970’s-era spacecraft as it nears the Earth in August.

"The intrepid ISEE-3 spacecraft was sent away from its primary mission to study the physics of the solar wind extending its mission of discovery to study two comets." said John Grunsfeld, astronaut and associate administrator for the Science Mission Directorate at NASA headquarters in Washington. "We have a chance to engage a new generation of citizen scientists through this creative effort to recapture the ISEE-3 spacecraft as it zips by the Earth this summer."

Launched in 1978 to study the constant flow of solar wind streaming toward Earth, ISEE-3 successfully completed its prime mission in 1981. With remaining fuel and functioning instruments, it then was redirected to observe two comets. Following the completion of that mission, the spacecraft continued in orbit around the sun. It is now making its closest approach to Earth in more than 30 years.

The goal of the ISEE-3 Reboot Project is to put the spacecraft into an orbit at a gravitationally stable point between Earth and the sun known as Lagrangian 1 (L1). Once safely back in orbit, the next step would be to return the spacecraft to operations and use its instruments as they were originally designed. ISEE-3's close approach in the coming weeks provides optimal conditions to attempt communication. If communications are unsuccessful, the spacecraft will swing by the moon and continue to orbit the sun.

NASA has shared technical data these citizen scientists to help them communicate with and return data from ISEE-3. The contributions of any citizen science provided by the spacecraft, if it is successfully recovered, depend on the current condition of its instruments. New data resulting from the project will be shared with the science community and the public, providing a unique tool for teaching students and the public about spacecraft operations and data gathering. The data also will provide valuable information about the effects of the space environment on the 36-year old spacecraft.

The ISEE-3 mission opened new pathways for scientific exploration, helping scientists better understand the sun-Earth system, which at its most turbulent can affect satellites around Earth and disrupt our technological infrastructure.

To learn more about the ISEE-3 Reboot Project, visit: http://spacecollege.org/isee3