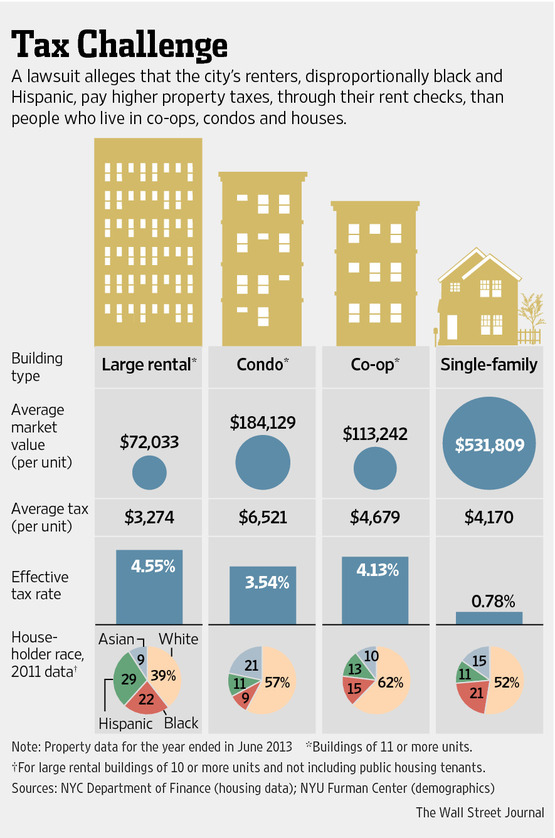 A class-action lawsuit has launched a constitutional challenge to New York City's complicated property-tax system, a formula that has mystified skyscraper owners and renters for a generation.

The lawsuit, filed on Wednesday in state Supreme Court in Manhattan, charged that the system unfairly affects blacks and Hispanics who live in rental buildings that pay higher taxes than owners of co-ops, condos and single-family houses. Renters indirectly pay property taxes through rent checks, the suit said.

The suit seeks to throw out much of the city's $20 billion property-tax system set up by the state Legislature in 1981, over a gubernatorial veto. Four tax rates for different types of properties were created, with special rules to cushion owners of one- to three-family homes against rising property values.

"For too long, this has been a reverse Robin Hood where the government has been taking from the poor to subsidize the rich," said attorney Lucas Ferrara of Newman Ferrara LLP, the real-estate law firm with a civil-rights practice that filed the suit.

Lawyers for the city and state declined to comment until they had a chance to review the lawsuit.

The system has been the subject of complaints ever since it was created, with everyone from office-building owners, rental landlords and even some individual apartment owners complaining that they are taxed too much. The system hasn't faced a serious constitutional review in recent years, lawyers say.

The suit challenges the system on constitutional grounds as well as violating the anti-discrimination provisions of the Federal Fair Housing Act.

The complaint argued that higher taxes on rental buildings have a disparate impact on blacks and Hispanics, who make up more than half of all renters but occupy only 20% of condominiums, 27% of co-ops and 32% of single-family houses.

"I would just like to see that the playing field gets level for the working class and middle class," Ms. Rodriguez said.

She said she was dismayed by a city study showing that an average of 30% of rent goes to cover a landlord's property taxes.

Randolph M. McLaughlin, another lawyer on the case, said the plaintiffs weren't seeking money damages, but court-directed changes to the system to make it fairer.

But if the lawsuit succeeds in challenging the tax system, it could have some unintended consequences. It could benefit the city's wealthiest landlords, lowering rates for lucrative rental properties and commercial buildings. And some renters in the city live in co-ops and condos that are rented out by their owners.

While blacks and Hispanics are disproportionately represented among renters, they also make up a significant group of homeowners in Brooklyn and Queens. A study by the Furman Center at New York University found that some minority neighborhoods such as East New York and Bedford Stuyvesant in Brooklyn had among the lowest effective tax rates—the amount of taxes paid as a percentage of the property's value.

Brooklyn's Park Slope, where Mayor Bill De Blasio lives, had the lowest effective tax rate of all, the report found.

A version of this article appeared February 27, 2014, on page A19 in the U.S. edition of The Wall Street Journal, with the headline: Property-Tax System Faces A Challenge.