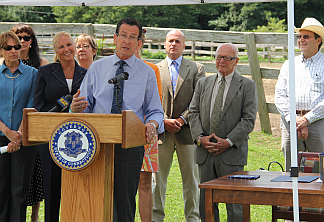 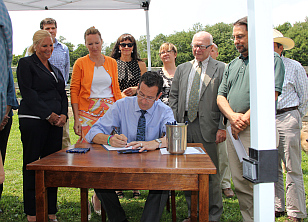 Last week, Governor Dannel P. Malloy held a ceremony at Locket’s Meadow Farm in Bethany with farmers and other stakeholders from the state’s agricultural community to commemorate the passage of a new state law that protects the owners and handlers of domesticated horses from a recent court ruling by making it clear in state statute that the animals do not possess a “naturally mischievous or vicious propensity.”
“Connecticut has a large population of horse owners and handlers, and as such, I’m happy to sign this legislation so that we can ensure their operations can continue without possible negative consequences,” Governor Malloy said. “I am proud of Connecticut’s growing agricultural sector, and I remain committed to the growth of this industry and to the hard working farm families of Connecticut.”
The Governor introduced the legislation – Public Act 14-54, An Act Concerning the Liability of Owners and Keepers of Domesticated Horses, Ponies, Donkeys and Mules – earlier this year in response to rulings by the state Appellate and Supreme Courts, which in practice may have resulted in increased insurance rates for horse owners and handlers, and would have caused a significant financial hardship for many farmers and horse owners across the state. The bill was adopted unanimously in both the House and the Senate.
“The Governor’s initiative and legislative action on this matter will meaningfully protect the equine sector of the state’s agricultural economy and limit the potential damage and unintended consequences of the court’s decision on livestock production in Connecticut,” said Department of Agriculture Commissioner Steven K. Reviczky.
Agriculture contributes about $3.5 billion annually to the state’s economy and accounts for 28,000 jobs. A recent U.S. Department of Agriculture report showed that the number of farms in the state increased by 22% over the last five years, leading all of New England in the growth rate. This comes despite an overall decline in farm numbers nationally.
Locket’s Meadow Farm in Bethany, where today’s ceremony took place, is a sanctuary for at-risk farm animals, many of which have been rescued from slaughter, neglect or abuse. The farm’s horses and ponies are used for a riding program, offering both traditional riding lessons as well as therapeutic riding for children and also adults with varying mental and physical challenges.
Categories: