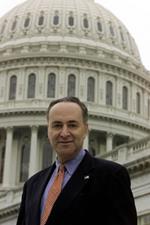 
With Technology Poised To Become Widespread, Schumer Asks FTC To Immediately Institute Rules That Would Require Retails To Alert Shoppers They Are Being Tracked, and Give Them Opportunity To Opt-Out, Before Tracking Starts


Swatch, American Apparel, Family Dollar And Benetton Have All Tested or Are Currently Using Technology to Track Shoppers, Often Without Their Knowledge

Yesterday, U.S. Senator Charles E. Schumer revealed that major national retailers are increasingly using sophisticated monitoring software to track every movement shoppers make while in their stores, and then often times save that data in perpetuity. The technology allows shoppers to be tracked, moment by moment, through signals put out through their smart phones, allowing a retailer to learn in what part of the store they spent time in, what products they’ve considered buying, and how long they've spent looking at those products. If a shopper doesn’t want to be tracked, their only option is to turn off their phone’s Wi-Fi, or leave their phone at home. And most of the time, that isn't even an option because consumers don’t know the tracking is occurring.

To combat this invasion of privacy, today Schumer asked the Federal Trade Commission to require that retailers give shoppers a clear and obvious opportunity to “opt-out” before tracking them. Schumer said that a consumer’s personal cell phone is just that – personal. It shouldn’t be used as a tracking device by retailers without a consumer’s permission. Schumer suggested the FTC require that stores send electronic notices to the phones they are about to start tracking, and give the owners of those phones a chance to opt-out.

“Cell phone tracking is intrusive and unsettling - it’s as if you are being followed around while shopping at the mall, with someone looking over your shoulder at every product you're considering,” said Schumer. “If you're shopping, you expect to be the one doing the reviewing, but stores are flipping that on its head, and treating the consumers as the products. If stores are going to track you footstep by footstep, you should be alerted in no uncertain terms, and be given the opportunity to decline. Personal cell phones are just that - personal. They shouldn't be used as some James Bond-like tracking device without the shopper's knowledge."

According to published reporters, retailers like United Colors of Benetton, American Apparel, Swatch and Family Dollar gain access to the shopper’s unique cell phone ID and acquire information about shoppers without their permission. Retailers may use this information to find out how shoppers navigate through their store and how long they look at specific merchandise before purchasing. Currently, in order to prevent these stores from tracking you via a cell phone, you must shut off the Wi-Fi on your phone or leave your phone at home or in the car. And frequently even that is not an option, since consumers don't know they are being tracked.

Retailers can then combine the data they've collected with data found online, creating an incredibly detailed profile of each shopper. Schumer pointed out that consumers have no say over how that data is used, who it’s sold to, where it's stored, or how it's secured.

Retailers purchase this tracking technology from third-party technology companies like Cisco, Euclid Analytics and Path Intelligence, a British company that provides its services to retailers and malls across Europe and Australia.

Schumer has highlighted concerns about cell phone tracking in the past. In 2011, two U.S. malls halted their experimentation with the technology after Schumer raised privacy concerns.

Schumer today urged the FTC to allow shoppers to opt-out of this cell phone tracking program. Schumer explained that this is a deceptive trade practice because shoppers are unaware that their movements are being tracked and urged the FTC to make retailers notify shoppers if they use this technology. Schumer suggested that the FTC consider requiring retailers to send text messages or other electronic messages to the phones they are about to start tracking, and give the owners an opportunity to opt-out of the tracking.

A copy of Schumer’s letter can be found below:

Over the past several months retailers around the country have increasingly been exploring technologies that use a shopper’s unique cell phone ID to follow their movements throughout shopping centers and individual stores. The technology allows shoppers to be tracked throughout a store, allowing a retailer to acquire information about shoppers without their permission. Retailers do not ever receive affirmative consent from the consumer for this type of tracking, and the only options for a consumer to not be tracked are to turn off their phone’s Wi-Fi, or to leave the phone at home.

Geophysical location data about a person is obviously highly sensitive; however, retailers are collecting this information anonymously without consent. I would ask that the Federal Trade Commission investigate this practice, and clarify that it is an unfair or deceptive trade practice to fail to notify shoppers that their movements are being tracked in a store or to give them an opportunity to opt out of this type of tracking before it begins. As these technologies become more widespread, it is imperative that we protect our consumers from unknowingly giving out information they do not desire to.

I look forward to hearing from you on this important issue.